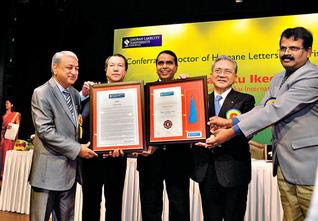 In pursuit of peace

"The global turmoil that has followed terrorist attacks on Paris, Mumbai and New York in recent years underscored the need to nourish a philosophy that emphasises sanctity of life for lasting peace," said Anoop Swaroop, Vice-chancellor of Jagran Lakecity University. The occasion was awarding honorary Doctorate of Humane Letters (Humanity and Arts) to Daisaku Ikeda, Buddhist philosopher and president Soka Gakkai International (SGI) in recognition of his untiring pursuit of peace and love for humanity. Since Ikeda was not present, Minoru Harada, Soka Gakkai President, accepted the award on his behalf.
The award was held in the institution's campus in Bhopal but shown live in the Capital's Chinmaya Centre, where there was a gathering of scholars and teachers. Noting that the terrorist attacks and the retaliatory response to them make Ikeda's thought relevant in today's times, Swaroop said, "The very ethos and central tenet of Ikeda's thought, and of Buddhism, is the fundamental sanctity of life, a value which Ikeda sees as the key to lasting peace and human happiness. In Ikeda's view, global peace relies ultimately on a self-directed transformational change within the life of the individual, rather than on societal or structural reforms alone."
The citation express appreciation for Ikeda's 2015 Peace Proposal and his emphasis on dialogue for the sake of mutual co-existence as well as the self-directed transformation within the individual could lead to social transformation. Appreciated for his dedication to peace, Ikeda has received 363 honorary doctorates so far and the current honour is the 14th he has received from India.
In his acceptance speech, as conveyed by Harada at the event, Ikeda said, "As humanity wrestles with the darkness of the times, the world yearns for the light that issues from young people imbued with indestructible hope." Expressing his appreciation for the honour bestowed on him, Ikeda said it was a great privilege to be recognised by a distinguished institution of higher learning. "Educational efforts grounded in a philosophy of respect for the dignity of life can be a source of enduring inspiration to people and create unfathomable value."


Sent from my iPhone
Posted by ChangCL's Site at 8:55 PM