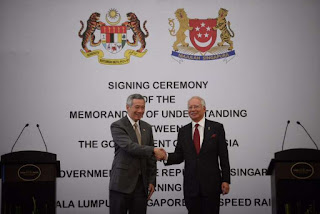 PUTRAJAYA - The long-awaited High Speed Rail connecting Singapore and Kuala Lumpur is targeted to be up and running by around 2026, cutting the travelling time between both cities to 90 minutes.

The two terminal stations will be at Jurong East in Singapore and Bandar Malaysia in KL. The High Speed Rail line will pass through another six intermediate stations in Malaysia that will be connected by a domestic service. These stations are Iskandar Puteri, Batu Pahat, Muar, Ayer Keroh, Seremban and Putrajaya.

The trains will run at a top speed of more than 300kmh.

Besides the non-stop Singapore-KL express service and the domestic service within Malaysia, there will be a shuttle service between Singapore and Iskandar Puteri in Johor.

Passengers will be able to clear customs, immigration and quarantine for both countries at their point of departure, reducing hassle. Both governments will co-locate these CIQ facilities at three locations - Singapore, Iskandar Puteri and Kuala Lumpur.

In Putrajaya on Tuesday (July 19), Singapore Prime Minister Lee Hsien Loong and Malaysian Prime Minister Najib Razak witnessed the signing of a Memorandum of Understanding (MOU) that paves the way for more detailed planning and eventual construction of the ambitious rail link.

The MoU is a step forward and signifies our firmest commitment to the iconic KL-Singapore High Speed Rail project https://www.najibrazak.com/bm/blog/mou-on-kl-singapore-high-speed-rail/ …

The MOU was signed by Coordinating Minister for Infrastructure and Minister for Transport Khaw Boon Wan and Malaysian Minister in the Prime Minister's Department Abdul Rahman Dahlan. It will guide the development of a legally binding Bilateral Agreement to be signed by both governments towards the end of this year.

There are still some details that need to be worked out, but both governments have agreed on many key issues which are captured in the MOU, said PM Lee at a joint press conference after the signing.

These areas of agreement include a target of 2026 for the High Speed Rail to begin operations, said Malaysia's Land Public Transport Commission and Singapore's Land Transport Authority in a joint statement.

After signing the Bilateral Agreement, "the execution of this agreement will be crucial", with a need to work closely together on many joint decisions and difficult implementation issues, said PM Lee.

"But we are all committed to putting full attention to this, because we want this major bilateral project to be done right," he added.

Calling the 2026 target "a very ambitious timetable", he noted that even MRT lines in Singapore typically take 12 to 15 years from inception to service, whereas the cross-border High Speed Rail is on a much bigger scale.

"But we must get this right, because the HSR will bring our two countries together and change the way each of us think of the other," he added.

The 1½-hour ride will draw the peoples and economies of both countries closer together, he said, comparing Singapore and KL to other rail-linked cities such as London and Paris.

Singaporeans can zip up to KL, watch a show or conduct business, work on their laptop on the train back and still be home for dinner, he said: "It will not seem like going overseas at all."

The High Speed Rail is a massive, long-term investment by both governments that demonstrates not just how close the countries are, but how they want to work together, he added.

Asked by reporters how both governments will ensure that the tender process will be fair, transparent and open, PM Lee said that is one of the issues that has to be settled.

Mr Najib also stressed both governments' commitment to the fairness of the tender process.

Both governments have agreed to each take responsibility for developing, constructing and maintaining the civil infrastructure - such as tunnels - within their own countries.

To provide and maintain the High Speed Rail assets such as tracks and trains, an assets company will be appointed through an international tender. Also to be appointed through international tenders are two train operating companies. One will operate two international services: the 90-minute express service between Bandar Malaysia - which is 3km from Kuala Lumpur's financial district - and Jurong East in Singapore, and a shuttle service between Iskandar Puteri and Singapore.

The other train operating company will run the domestic service within Malaysia.

A Bilateral Committee with representatives from both governments will be formed to manage and regulate aspects of the project which might affect the cross-border services.

In a separate statement, Singapore's Land Transport Authority said that within the next month, it will call an advance engineering study tender for consultants to carry out engineering studies for the Singapore stretch of the High Speed Rail, which will terminate in Jurong East.

This study will include looking at the alignment of the rail link, the architectural and engineering design of the terminus station, noise and vibration issues, and the preparation of tender documents for the project's construction phase. The study is expected to start by the first quarter of 2017 and will take about 18 to 24 months to complete.

It is understood that, following advance works, construction of the High Speed Rail line may begin in 2018.

Sent from my iPhone
Posted by ChangCL's Site at 6:45 AM