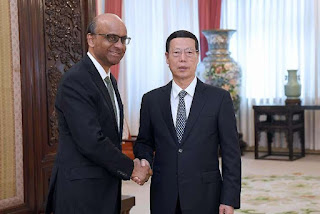 Singapore-China ties to deepen in 5 key areas of finance

Signalling that cooperation between the two countries takes many forms, Mr Tharman said regulators and financial markets on both sides are looking to deepen links with the long-term objective of internationalising the yuan capital markets and providing sound financial underpinning to China's Belt and Road initiative (BRI) without causing short-term market instabilities.

The BRI is China's ambitious plan to build infrastructure such as railways and ports across a network of countries to recreate the Silk Road of yore.

The first area is in finding ways to expand project financing for BRI-related infrastructural projects through Singapore, Mr Tharman, who is also the chairman of the Monetary Authority of Singapore (MAS), told reporters at the end of his five- day visit to China.

Singapore is already a major location for this, with about two-thirds of project financing in South-east Asia arranged out of Singapore.

Regulators are also looking at ways for banks from both countries to grow their presence in each other's markets, said Mr Tharman, who met chairman of the China Banking Regulatory Commission (CBRC) Guo Shuqing and governor of the People's Bank of China (PBOC) Zhou Xiaochuan yesterday. The PBOC is China's central bank.

Both sides are also keen on strengthening capital market linkages between Singapore and China, as Chinese regulators recognise Singapore's distinct strengths here, such as in the bond markets, he added.

The fourth area is closer collaboration in the money markets, which will help investors to manage financial risks related to long-term investments that characterise many of the projects under the BRI.

"We would like to develop the long-term renminbi market instruments that can help investors manage the financial risks that are part and parcel of long-term borrowings and investments in infrastructure," Mr Tharman said, referring to the other name for the Chinese currency.

Finally, Singapore and China are looking at working together to train officials from BRI countries in the area of finance, such as in project preparation and project finance.

Mr Tharman said these initiatives did not come out of the blue, but are the result of an alignment in thinking between MAS and Chinese regulators, as well as trust and momentum built over time and successive visits from both sides.

Singapore and China are also working to conclude the upgrade to the China-Singapore Free Trade Agreement, with enhancements to areas such as investing, trade and market access. He expressed hope the new agreement will be signed by next year, the 10th anniversary of the signing of the original agreement.

"There was a good third round (of negotiations) two weeks ago, and both sides were willing to put some new things on the table (and) there was a willingness for this to be a substantive upgrade and not just a routine renewal," he said.

Sent from my iPhone
Posted by ChangCL's Site at 8:49 AM