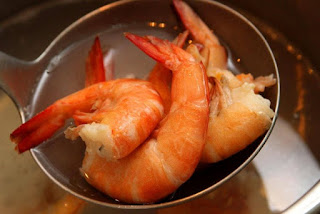 SINGAPORE - She knew she was allergic to prawns but Ms Khoo Siew Hong, 60, still went ahead and ate some, which turned out to be a fatal mistake.

She started itching after eating two prawns that her helpers had prepared for laksa on March 8. She then went limp and later died in hospital from an allergic reaction to the shellfish.

State Coroner Marvin Bay on Monday (Aug 21) said her death was a "truly unfortunate misadventure", and it shows how important it is to take food allergies seriously.

He said: "Allergic reactions to prawns and other shellfish can be unpredictable, with varying symptoms between different individuals. A single individual may not always experience the same symptoms during every reaction, which may have lulled Ms Khoo into a sense of complacency that such episodes could readily be addressed and controlled. Often, the allergic reactions become more severe with each exposure."

The coroner said Ms Khoo, who was unemployed and used a wheelchair to get around, lived with her sister and two helpers - Ms Rosemarie Bastareche and Madam Ten Ah Boh - in a flat at Lorong 3 Geylang.

On March 4, the four of them went to Shin Yeh restaurant in Liang Court shopping mall for lunch, where Ms Khoo ate some prawn dumplings without suffering from an allergic reaction. Four days later, at around noon, she wanted to eat the prawns prepared for the laksa, and her maids gave her two pieces.

About 2½ hours later, Ms Khoo complained of itchiness. Ms Bastareche gave her an antihistamine tablet, which was prescribed to her by a doctor from Tan Tock Seng Hospital (TTSH).

About five minutes later, Ms Bastareche noticed that Ms Khoo's face had started to develop a rash, with some swelling. The rash soon increased in intensity. After about 20 minutes, Ms Khoo complained of breathlessness.

With the help of an SCDF officer on the phone, Ms Bastareche performed cardiopulmonary resuscitation (CPR) on Ms Khoo until paramedics arrived at 3.40pm.

She was rushed to TTSH and given 12 doses of adrenaline. However, she did not regain consciousness.

With her family's consent, she was taken off the ventilator, and died at about 9.50pm.

She was later found to have died from a severe allergic reaction or anaphylaxis linked to a food allergy. According to an autopsy report, she had an accumulation of fluid in her larynx - a symptom linked with an allergic reaction - and her lungs were congested.

The coroner said people who suffer from shellfish allergies must take certain precautions.

He said: "The only absolute way to prevent shellfish allergy is to avoid all shellfish and all products that contain shellfish. When dining out, it is prudent to ask how the food is prepared, and read food labels carefully."

Sent from my iPhone
Posted by ChangCL's Site at 8:01 AM