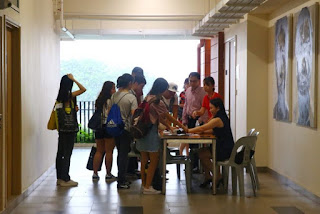 SINGAPORE - A parcel containing A-level chemistry answer scripts from 238 Singapore students was stolen from a courier van transporting the papers to an examiner in Britain last November.

Despite extensive efforts to trace the scripts for Chemistry Paper 3, which carries 35 per cent of the marks for the subject, they have not been recovered.

Meanwhile, the 238 affected students from four junior colleges - Anderson JC, Anglo-Chinese JC, Hwa Chong Institution and Nanyang JC - have been awarded final grades based on their performance in the other three chemistry papers and their cohort's performance in chemistry.

The 238 affected students make up about 3 per cent of the total 8,843 students who sat the paper.

To check for consistency, Cambridge Assessment and the Singapore Examinations and Assessment Board (SEAB) also took into consideration the candidates' school-based examination results.

SEAB said all 238 candidates obtained at least a pass grade, with 81 per cent of them scoring As and Bs. More than 50 per cent are said to have scored As.

"All of them attained better grades or maintained their grades compared to their school-based examinations," said a SEAB spokesman on Friday (Feb 23).

Those unhappy with the awarded grades can also choose to resit Paper 3 in April and results will be released by mid-May 2018.

In addition, candidates in full-time national service have the option of resitting the paper in November and their results will be released by February 2019.

The re-examination will be based on the same curriculum that the candidates had been taught in school and pegged at the same standard as the 2017 paper. The examination format will also remain unchanged.

Those who choose to resit the paper will have the better of the two grades recorded.

SEAB will work with local universities to ensure that their applications for places or scholarships are not affected.

When asked why SEAB informed the students about the incident only on Friday, it said that informing the students earlier without being able to share their awarded grades would have caused undue anxiety.

SEAB also said that grade projections for the 238 affected candidates could be done only after all chemistry papers for the whole cohort had been marked.

Ms Tan Lay Choo, chief executive of SEAB, said the board has taken all necessary steps to ensure that the affected candidates were not put at a disadvantage and were given a valid and fair assessment.

She said that Cambridge Assessment and SEAB have an established procedure to award grades to candidates who miss a paper with valid reasons, such as illness. When the weighting of the paper does not exceed 50 per cent of the total score, a re-examination is not required.

This procedure is a well-established practice among British examination boards.

Ms Tan said that Cambridge has given its assurance that it would review its processes to prevent a recurrence.

She added: "We understand the concerns that the affected candidates may have. SEAB and schools are in contact with them and their parents and will continue to provide them with the necessary support."

The courier reported the theft to the British police but efforts to recover the scripts have so far been unsuccessful. Police investigations are still ongoing.

This is the second time that Singapore examination scripts have gone missing. The last time was in 1993, when the then University of Cambridge Local Examinations Syndicate lost the O-level scripts of 259 Singapore students who sat the English literature paper.

The scripts which were sent to an examiner were lost in the British postal service and never recovered.

The students were awarded grades based on their performance in their schools' preliminary examinations. They were also given the option to resit the examination.

He said the agency has been working with the courier company and British police to locate the stolen answer scripts but unfortunately, they have not been recovered.

"The security of examination papers is of the utmost importance to us. Cambridge Assessment will continue to review the situation with the police and the courier company."

The Straits Times spoke to four affected students, and three out of the four were happy with their A and B grades.

Nanyang JC student Zou Pei Pei, 19, who got a B, said the majority of her affected classmates did well and were not planning to resit the paper. "I believe the predicted marks were quite fair and they took into account many things."

Another student from the same JC said he scored an A despite not answering a third of Paper 3. "I still got an A even though I was expecting a B or C. However, God listened to my prayers and this incident happened, resulting in my distinction."

A Hwa Chong Institution student, though, was unhappy at the B grade she was awarded and said she is considering resitting the paper. "I couldn't believe it when we were told of the incident. Anyway, I think I could have managed an A, that's why I am not happy with my B. It matters when you are applying for a highly competitive university course."

Sent from my iPhone
Posted by ChangCL's Site at 9:07 PM