Earth has near-miss with asteroid that snuck up on scientists, World News & Top Stories - The Straits Times

Earth has near-miss with asteroid that snuck up on scientists, World News & Top Stories - The Straits Times 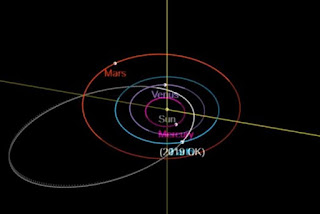 Earth has near-miss with asteroid that snuck up on scientists

SYDNEY - A large asteroid barely known to science zoomed past the Earth on Thursday (July 25), speeding by within 73,000km of the planet.

That might sound far but it's about a fifth of the distance to the Moon, scientists said, and a pretty close call.

Called Asteroid 2019 OK, the rock measured between 57m and 130m in diameter, Nasa's Jet Propulsion Laboratory said on its Center for Near Earth Object Studies website.

If it had hit the Earth, it could easily wipe out a city, Swinburne University astronomer Associate Professor Alan Duffy told The Sydney Morning Herald.

"It would have hit with over 30 times the energy of the atomic blast at Hiroshima," he said.

"It's a city-killer asteroid. But because it's so small, it's incredibly hard to see until right at the last minute," he said. "It's threading tightly between the lunar orbit. Definitely too close for comfort."

The asteroid flew past at 1.22pm Singapore time at a speed of about 24km per second, Nasa said.

Asteroid 2019 OK was discovered by the Brazilian Sonear survey just days ago, and its presence was announced hours before it zoomed past Earth, Dr Michael Brown, Associate Professor in Astronomy, at Monash University in Australia, wrote on The Conversation website on Thursday.

"The lack of warning shows how quickly potentially dangerous asteroids can sneak up on us," he said.

In a separate comment to the Herald, Dr Brown said: "This is one of the closest approaches to Earth by an asteroid that we know of."

The asteroid was approaching from the direction of the Sun, making it harder to detect, scientists said.

"Astronomers are good at discovering asteroids that are visible at night, but less good at spotting asteroids during the daytime. Asteroids also are fainter the further they get from Earth," he said.

"2019 OK has a very elliptical orbit, taking it from the asteroid belt beyond Mars to within the orbits of both Earth and Venus. As each orbit takes 2.7 years, it isn't always going to pass as close to Earth as it did this time. It will make close approaches in the future, but hopefully not quite this close."

He said other near-Earth asteroids are also on track to make close approaches.

Sent from my iPhone
Posted by ChangCL's Site at 6:29 AM