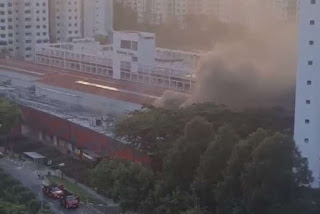 Fire at Rivervale Plaza on Saturday morning; no one injured

SINGAPORE - A ventilation exhaust duct located at the rooftop of Rivervale Plaza caught fire on Saturday (May 21) morning.

Singapore Civil Defence Force (SCDF) said they were informed about the fire at 7.13am. Two fire engines, two Red Rhinos, four support vehicles and one ambulance were deployed to the mall in Sengkang.

The fire was extinguished with two water jets within 20 minutes.

According to the SCDF, coffee shop patrons and shoppers at the mall had evacuated the building before help arrived. No one was injured.

The exhaust duct is believed to be linked to the various coffee shops in the building.

The cause of the fire is under investigation.

In a separate incident, a fire at Parkway Parade on Sunday (May 15) led to a four-day closure of the mall in Marine Parade.

The mall reopened on Friday but rectification works are still ongoing as several shops and some lifts and escalators had been affected by the fire. No one was injured in the fire that broke out at a shop on level two of the mall.

Sent from my iPhone
Posted by ChangCL's Site at 5:44 PM