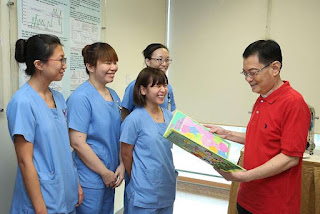 Finance Minister Heng Swee Keat was discharged from hospital yesterday, six weeks after collapsing from a stroke that saw him placed in intensive care, in what was described as a remarkable recovery.

In his first public statement since then, he said: "Home! The last few weeks were the toughest of my life." He acknowledged the outpouring of concern from the public, the work of doctors and nurses, as well as the help of the paramedics who had rushed him to hospital.

"I could get through this time because of the strong support from my family, great medical care, and the kindness from all of you," he said yesterday in a Facebook post.

A minute-long video accompanying the post shows a slimmer Mr Heng looking cheerful as he walks around thanking his medical team.

In announcing his discharge, the Prime Minister's Office (PMO) said that Mr Heng "has made an excellent recovery".

Foreign Minister Vivian Balakrishnan echoed this, writing in a Facebook post: "I would not have dared to hope for such a miraculous quick recovery on that fateful evening as we discussed the emergency treatment options."

He had, together with Defence Minister Ng Eng Hen and Minister of State Janil Puthucheary - all doctors - attended to Mr Heng when he collapsed during a Cabinet meeting on May 12 from a stroke due to an aneurysm, a localised weakening of a blood vessel.

In a text message to his fellow Tampines GRC MPs, Mr Heng said that he has "recovered most of his functions".

But he is still on medical leave as he continues his rehabilitation, and Deputy Prime Minister Tharman Shanmugaratnam will continue to cover his duties in the Finance Ministry, said the PMO.

Doctors who spoke to The Sunday Times said it would typically take three to six months for a stroke patient to recover fully.

Mr Heng underwent successful endovascular coil embolisation - surgery to seal off the aneurysm on the same day of the stroke - said the PMO. He was also treated with antibiotics for a lung infection.

In his Facebook post, he said he was grateful for all the help he had received. "If not for the critical help of many people, including my colleagues in Cabinet on the day of my stroke, I wouldn't be here now."

He also singled out the staff of Tan Tock Seng Hospital, the National Neuroscience Institute and the Singapore Civil Defence Force.

He added that he was touched by the various religious groups that organised prayer sessions for him and the people who sent him messages, cards and flowers.

"It was not just about medical care. One more thing made a difference... all your prayers and good wishes," he said adding that he had received their wishes and gifts.

To his Tampines GRC MPs and colleagues, who pitched in to make sure that residents in his ward were cared for, he said: "This is true team spirit, thank you."

News of his discharge was welcomed by colleagues and Singaporeans, who took to social media to ask him to focus on his recovery.

Prime Minister Lee Hsien Loong, who had provided updates on Mr Heng's condition over the weeks, said in a Facebook post: "I know from personal experience that recovering from serious illnesses takes time. I have advised Swee Keat to take things step by step. No constant checking of his e-mail or his phone!"

President Tony Tan Keng Yam said he had heard from Mr Heng in a personal letter and was glad he was doing better.

Mr Heng said: "I look forward to when I can see everyone again."

Sent from my iPhone
Posted by ChangCL's Site at 7:25 PM