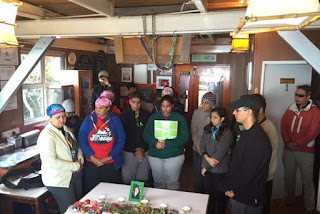 Almost a year after a deadly earthquake struck Mount Kinabalu in Malaysia, 20 Singaporeans who lost loved ones in the disaster began their own ascent up the mountain.

They are making the climb to finish what the victims could not, and pay tribute to those who perished on this day last year. Ten Singaporeans died, of which seven were Primary 6 pupils from Tanjong Katong Primary School (TKPS).

Donning white T-shirts with the tag Omega Challenge Braveheart, the group did a cheer and said a prayer with family members of the late Sabah trainers before setting off from Kinabalu Park headquarters yesterday morning to Timpohon Gate, the starting point for the trek.

They will take part in a ceremony on the mountain this morning at 7.15am - the exact time the earthquake hit - and plan to reach the summit tomorrow. The team, comprising former schoolmates, parents and relatives of the victims, remained energetic during the hike.

Mrs Karen Jhala, 49, whose daughter Sonia was among the victims, said the team wanted to "complete what was left incomplete".

"This has brought the family together," said Sonia's uncle, Mr Trilok Jhala, 57, who is also on the climb. "We are trying our best. We have been training for some time."

The commodity trader said the family trained mostly at MacRitchie Reservoir and at a Housing Board block to practise climbing steps.

Mr John Quok made the trip with his son Elliot, a former TKPS pupil.

The 45-year-old, who works in investment, said he has been training for nine months. "What I want to achieve is to retrace what the children had started," he said. The group declined to speak at length to The Sunday Times, citing an exclusive contract for a documentary.

During yesterday's climb, they split up into several groups. Those ahead left encouraging messages for the others at rest stops along the way. The first climbers arrived at Laban Rata, where they will rest for the night, at 3.45pm yesterday. The last members arrived at night.

They are not alone in this journey.

Mr James Ho, 46, whose daughter Rachel died in the quake, has been corresponding with the group members since they arrived. "The families, as a whole, have been supporting one another and giving one another strength," said the banker, who did not go on the trip.

Mr Ho added that Sonia's father, Mr Jaidipsinh Jhala, 49, has been asking if he would like to pass on any messages to Rachel. "He has been really big-hearted in doing things for us, since we are not there."

Pastry chef Hazreen Hussain, 39, had pulled out from the climb in February at her daughter Hanis Umairah's request.

Hanis was on the school trip last year and lost her best friend Peony Wee in the quake. With the anniversary of the incident approaching, Madam Hazreen said Hanis started having flashbacks last week.

Although she could not be with the climbers, Madam Hazreen is glad the others made it. "I appreciate it so much that they want to complete the journey for the kids."

Every day, banker James Ho, who lost his daughter when an earthquake struck Mount Kinabalu one year ago, looks forward to a simple dinner with his family after work.

For Mr Ho, 46, those intimate moments over dinner are "the highlight of the day for me now".

His daughter, Rachel, 12, was one of seven Primary 6 pupils from Tanjong Katong Primary School (TKPS) who died in the earthquake on June 5 last year. Two teachers from the school and a Singaporean adventure guide on the TKPS expedition also lost their lives.

Baby on the way, but dad still misses late daughter

A year after losing their daughter Peony in the earthquake on Mount Kinabalu, Mr Alson Wee, 52, and his wife will be welcoming a new addition - a baby boy - to the family.

The boy is due on June 9, four days after the one-year anniversary of the quake.

Mr Wee, who works in shipping, is looking forward to having a son, but still misses his daughter. "I still miss hearing her cheerful voice," he said. "I miss talking to her."

A part of the Via Ferrata trail that the Tanjong Katong Primary School pupils were on when the earthquake struck last June has been rerouted to avoid the damaged areas on Mount Kinabalu.

The Walk the Torq route, located 3,520m above sea level, was partly damaged by falling rocks set off by the quake and closed for several months to allow for repair works and the diversion. Equipment lost or destroyed then has also been replaced.

Since its reopening in January, the upgraded route receives about 100 climbers weekly, down from about 150 previously.

She lost her hero, who saved pupils during quake

They had been due to marry last November. But for nurse Jessica Veronica Sikta, 26, that promise would never be fulfilled.

Her fiance, adventure trainer Valerian Joannes, was among those who died in the earthquake that struck Mount Kinabalu last June.

Ms Sikta, who still wears the engagement ring - a simple silver band - given to her by Mr Joannes, told The Sunday Times: "I can only imagine how life could be brighter with him, a caring, loving responsible future husband and father to our children."

It's been hard but trainers coping well

That morning, the 35-year-old, who had been tasked with taking pictures for his employer's Facebook page, was leading the first of five groups of pupils up a simplified Via Ferrata route on the mountain when disaster struck.

A 5.9-magnitude earthquake sent rocks - some the size of houses - raining down on the group.

Sent from my iPhone
Posted by ChangCL's Site at 12:26 AM