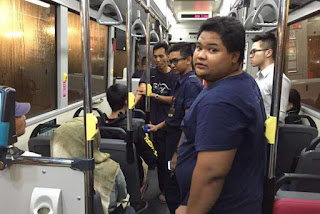 SINGAPORE - Two full-time national servicemen (NSF) from the Singapore Civil Defence Force (SCDF) spotted and helped a bus passenger who almost passed out due to an asthma attack.

The incident was shared online by another passenger, Mr Alvin Chew, who witnessed it at about 8.15pm on Wednesday (Aug 17).

Many netizens have praised their actions after the story was shared on Facebook and other websites.

Mr Chew, 29, told The Straits Times that he was heading to Woodlands on service 187 when the bus stopped for an unusually long time around Bukit Panjang.

He credited the two men, whom he identified as private Muhammad Hafiz and private Hendriyanto, with spotting the strange behaviour of the victim.

"Turns out that our two SCDF NSFs had noticed the passenger behaving strangely and alerted the bus captain, and called for the ambulance at the same time," he wrote in his Facebook post.

The passenger, who was at the front of the bus, was lying down on the bus seat when he came forward, he said.

Besides calling for the ambulance, Mr Hafiz and Mr Hendriyanto also spoke to the passenger and kept him conscious while they waited.

"They were with the guy the whole time and kept asking 'are you ok?'," he said.

Mr Chew estimated that the ambulance arrived at around 8.30pm, and the bus moved off at 8.45pm.

Mr Chew, who works for the HomeTeamNS clubhouses, said he was impressed that the two NSFs, who were storemen, were vigilant even when off duty.

"They were going above and beyond their roles," he said, adding that he has since written to SCDF about the incident.

"All SCDF officers are trained at least in basic life saving skills and are encouraged to aid anyone in distress even when they are off duty or out of uniform," SCDF said.

"The conduct of the two SCDF officers, based the account of the bus passenger, exemplified the noble SCDF life saving mission and was indeed commendable."

Sent from my iPhone
Posted by ChangCL's Site at 7:22 AM