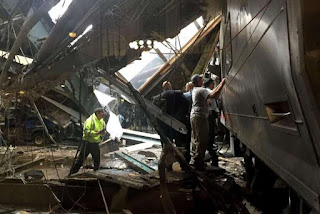 HOBOKEN, New Jersey (REUTERS) - New Jersey Transit train No. 1614 headed south from Spring Valley, New York, shortly before 7.30am, and for 16 stops it was a typical weekday morning commute for hundreds of passengers.

But around 8.45am, as the train approached its final destination in Hoboken, which sits on the Hudson River facing Manhattan, Linda Albelli, 62, realised from her seat in the rear of the train that something was not right.

"I thought to myself, 'Oh my God, he's not slowing up, and this is where we usually stop,'" she told Reuters in a phone interview.

Seconds later, the train careened through Hoboken Terminal, killing one person and injuring more than 100 others in what witnesses described as a chaotic and terrifying scene.

Jaime Weatherhead-Saul, who boarded the train in Wood-Ridge, New Jersey, was standing between the first and second cars when the train hurtled into the terminal's concourse, causing part of the building's roof to collapse.

"The train just felt like it never stopped," she said.

"There were people right in front of me that had fallen on top, that had toppled over one another, and they had some injuries. The people in front of me were badly injured. And then we just heard people screaming in the first car."

Mike Scelzl was sitting in the first car, not paying attention, when the train suddenly derailed.

"When we pulled in, there was screaming," he said.

In the station, William Blaine, a Norfolk Southern train engineer, had just gotten off a freight train and was getting coffee when he heard what sounded like a bomb going off.

"When I ran over, I practically stepped over a deceased person," he said.

Mike Larson, a New Jersey Transit machinist, was also in the station when he heard a deafening explosion as the train smashed through a bumper stop at the end of the track and flew through the air.

"It's hard to believe," said Larson, whose pants were stained with a victim's blood.

Erica Schaffer, 35, was walking to her office nearby after getting breakfast when she heard a huge crash, followed by people running out of the station, some screaming, some bleeding.

Injured passengers trapped inside the first car managed to escape through the train's windows, as fellow commuters and first responders helped pull them out.

Following the #Hoboken train crash this AM. Every medic, cop & firefighter is here. MANY injuries.

"Once we got off we noticed that people were stuck and they had to come through the windows," Weatherhead-Saul said.

"And the conductor came off and he was completely bloodied."

Passengers toward the rear of the train were more fortunate.

Amy Krulewitz, who was in the fourth car, said the doors opened and commuters were able to walk off in an orderly manner.

When she saw the train's first two cars, she was "stunned."

"I had no idea what the front of a train could look like,"she said.

Several people, possibly commuters who had been waiting on the platform, were trapped under rubble, several witnesses said, although officials said they were quickly freed and taken to local hospitals.

Dozens of people were carried out on stretchers, as emergency personnel streamed in and out of the station.

"When we got on the platform there was nowhere to go,"Albelli said.

"The ceiling had come down. There was just so much, a lot of people in need of attention."

Sent from my iPhone
Posted by ChangCL's Site at 4:38 PM