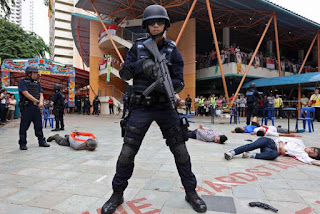 Every Singaporean family will have at least one member trained in spotting suspicious behaviour - part of a new nationwide movement to galvanise and prepare the country for terror attacks.

As part of SGSecure, every constituency will also have at least 300 residents trained in life-saving skills, such as cardiopulmonary resuscitation. There is also a new app to broadcast alerts and advisories during major emergencies, and which can be used to report incidents to the police.

Singaporeans all have a part to play in protecting themselves and those around them in the event of a terror attack, said Prime Minister Lee Hsien Loong as he launched SGSecure yesterday. He outlined three key aspects of the movement - people protecting themselves and their family; helping others in times of crisis; and community leaders being mobilised to help resolve friction. "Whichever part you play, you will be helping to protect Singapore and our way of life," he said.

When an attack happens, how people respond will determine whether Singapore stands together or falls apart. People can respond out of fear, or work together to overcome the threats and PM Lee said: "It's quite clear what the answer is: Stand up, do the right thing, get prepared, gird ourselves.

"Attacks will happen but we will be ready when it comes."

Saying that threats against Singapore have become more virulent and serious, he added that many recent attacks around the world have been carried out by self-radicalised "lone wolves" who target everyday venues, and use ordinary objects, such as knives or trucks, as weapons.

In Singapore's context, this could mean attacks in MRT stations, hawker centres and shopping malls, he said.

To combat these threats, the Government has stepped up security measures, but these efforts alone are not enough, he added.

SGSecure aims to train people in the skills they need to help them stay united during a crisis.

To illustrate how everyone can contribute, he cited a recent case in which a Malaysian man had remained in Changi Airport's departure transit area for 18 days by using forged mobile boarding passes. A worker at a lounge noticed something amiss and called the police.

Said Mr Lee: "You don't have to be a big hunky fellow. A young lady doing her job, keeping her eyes open, made a difference."

He also urged people to take part in Emergency Preparedness Day exercises that will be held in all 89 constituencies over the next two years, to learn what to do if an attack hits the heartland.

Home Affairs Minister K. Shanmugam, who was also at the event held at the Singapore University of Technology and Design, said most people still do not know what to do if caught in an attack. "We may not be able to stop an attack but how we respond the day after is an indication of our resilience and character," he said.

On the motivation behind SGSecure, Mr Lee said that at its heart, it is about protecting Singapore's racial and religious harmony.

Constant effort is needed to preserve this harmony, he said, citing as an example the Government's recent review of the elected presidency to ensure minorities are elected periodically. Mr Lee said the head of state embodies Singapore's multiracial society, and it was important for people of different races to feel that a member of their community can hold the office.

But he said the symbolism of the president must ring true in day-to-day life. He called on people to learn to give and take, reach out to one another, and speak out against racial and religious intolerance.

Sent from my iPhone
Posted by ChangCL's Site at 5:14 PM