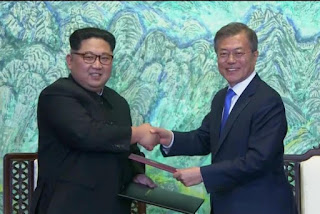 GOYANG, SOUTH KOREA - Leaders of the two Koreas on Friday (April 27) pledged in a joint declaration that they will uphold a policy of peace and work with the global community towards the complete denuclearisation of the Korean Peninsula.

"South and North Korea agreed to carry out disarmament in a phased manner, as military tension is alleviated and substantial progress is made in military confidence building," said the declaration signed by North Korean leader Kim Jong Un and South Korean President Moon Jae In after a full-day summit.

They added, in the document titled the Panmunjom Declaration for Peace, Prosperity and Unification of the Korean Peninsula, that they will seek the support of the international community in their pursuit for peace. They shook hands and exchanged a warm hug after their signing.

"The two leaders solemnly declare before the 80 million Korean people and the whole world that there will be no more war on the Korean Peninsula and thus a new era of peace has begun," the document said, coming after Mr Kim became the first North Korean leader to step foot into the South.

He added: "We should overcome challenges and hold hands together. I hope we can bring our will and wisdom together so that we can open up a new era of peace and prosperity."

"The declaration of the end of the Korean War and the signing of a peace treaty will establish sound and solid peace on the Peninsula," said Mr Moon.

He said that both he and Mr Kim believe in peace and prosperity and unification, and will hold regular meetings and discussions through a hotline.

The current division of the two Koreas, they said, was a "Cold War relic". They added: "Improving and cultivating inter-Korean relations is the prevalent desire of the whole nation and the urgent calling of the times that cannot be held back any further."

Fighting in the 1950-53 Korean War ceased with an armistice between the United States, China and North Korea, and which has to date not been replaced by a peace treaty. The two Koreas remain separated by a 4km wide, 248km long heavily fortified Demilitarised Zone (DMZ) that stretches from coast to coast.

The two leaders also said they would "alleviate acute military tensions and practically eliminate the danger of war on the Korean Peninsula" - including through the ceasing of all hostilities against each other - including land, air and sea, that could cause military tension and conflict.

Among these measures are military talks at the level of those with the rank of general, which will be convened next month (May).

They will strive to develop a "maritime peace zone" to prevent accidental military clashes and guarantee safe fishing activities, while such acts as the broadcast of propaganda messages through loudspeakers and the dropping of leaflets by air are to be stopped from May 1.

Their efforts are so as to "bring a swift end to the longstanding division and confrontation", and to actively develop closer inter-Korean relations. In this light, they will endeavour to resolve humanitarian issues through Inter-Korean Red Cross talks, and to realise the reunions of separated families and relatives on the occasion of the National Liberation Day on Aug 15 this year.

The two Koreas will also pursue dialogue and negotiations in various fields, including through high-level talks.

An inter-Korea joint liaison office will also be established in the border region of Kaesong to ensure the smooth exchange and cooperation between the two parties. They will also take practical measures to connect and modernise the Donghae and Gyeongui railway lines that cross the DMZ and connect the two Koreas.

The two Koreas have agreed to fully implement all existing agreements and declarations that have been adopted thus far.

Mr Moon said: "I pay tribute to the bold and courageous decision by Chairman Kim. We will jointly take on the leadership role and initiative, so as to set peace on the Korean Peninsula."

Sejong Institute research fellow Lee Seong Hyon told The Straits Times that this is a "landmark deal" which will pave the way for a much-watched summit meeting between Mr Kim and US President Donald Trump.

"Today was about declaring principles, about the big picture," he said. "Trump can definitely use this positive momentum into reality by hammering out a deal with Kim."

Sent from my iPhone
Posted by ChangCL's Site at 8:07 AM