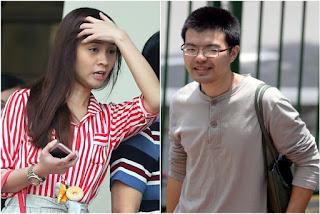 SINGAPORE - For five of his O-level examination papers here, Chinese student Zhou Zice relied on three tutors to help him fill in the blanks.

The tutors, who were stationed at a tuition centre, read the answers to him through a small earphone, which was connected to Bluetooth devices attached to his body and a mobile phone tucked in his back pocket.

But another Chinese student Chen Yi who received help from the same tutors was caught by an invigilator on Oct 24.

Zhou, who testified in court on Wednesday (April 18), said that after Chen was caught, the tutors from Zeus Education Centre in Tampines told him to lie if someone from the Ministry of Education were to call him.

He did not elaborate on what he was instructed to lie about, but said no one from the ministry contacted him.

Another alleged Singaporean accomplice Tan Jia Yan, 32, who was also employed by the centre, had pleaded guilty to 27 cheating charges on Monday (April 16).

When asked whether Poh Yuan Nie had read him any answers during the exam, Zhou said no. She also did not play a part in assisting him to attach or remove the communication devices on his body, he added.

The four accused allegedly helped Zhou, Chen and four other Chinese students cheat during the O-level exam. All six students sat the exam as private candidates.

Tan admitted to helping to attach Bluetooth devices and mobile phones to the students' bodies, with the other alleged accomplices. The students were also given skin-coloured "in-ear" earphones.

Tan took the exam as a private candidate and had a mobile phone attached to her chest and concealed under clothing. She used communication application FaceTime to beam images to her three alleged accomplices.

Zhou told the court that he came to Singapore in 2015 with the hope of attending an International Baccalaureate (IB) course.

He began classes at the tuition centre after his guardian, whom he had met while on holiday in Singapore a few years earlier, told him to.

Zhou said he is about to begin the IB course here.

The trial continues on Thursday.

Sent from my iPhone
Posted by ChangCL's Site at 7:44 PM