SINGAPORE - A mother's heartwarming post to thank an "MRT Uncle" for brightening up her son's morning trips has gone viral, with others joining in to share similar anecdotes of friendly train staff.

Ms Samantha Bek said she saw many complaints on train operator SMRT's Facebook page, and wanted to "brighten up someone's day" by recounting her experience.

In her post on Thursday (April 28), which has since garnered over 38,000 likes and 5,000 shares, Ms Bek shared how her four-year-old son Jovan looked forward to his train ride with her to school every morning because of his "favourite friendly MRT Uncle Zainodin" at Bishan station.

Speaking to The Straits Times on Friday, Ms Bek said the online reaction was "totally unexpected", adding that it was nice to see fellow commuters give credit to SMRT when it is due. The rail operator has faced intense scrutiny for its train breakdowns, including a four-line failure on Monday.

Ms Bek told The Straits Times that the unlikely friendship was struck up "a few months ago" when Mr Zainodin overheard her son calling him "Star Wars uncle" for the light baton which SMRT staff carry.

Since then, they have been greeting each other nearly every weekday morning at the same area near one of the station's escalators. On Friday, Mr Zainodin thanked them after learning of Ms Bek's Facebook post, and Jovan reciprocated with a box of chocolates.

"Despite his age, he will always squat and give my son a big hug. The two of them will chit chat while we wait for the train, and sometimes my son will show him his toys or books," said Ms Bek, 36, who works for parenting app ParentTown.

"This Uncle always greets me in the morning @ around 7am. And yes despite his age, he is fit cuz he walks quite fast from one end to another! It is quite obvious that he does his job with a lot of dedication & passion. Gd job Uncle," said user Ida VaMp.

Faili Majeed added: "He is always smiling and so polite despite the crowd in Bishan. And Bishan can be a madhouse yet he is so calm and patiently directs commuters.. love him!"

Mr Zainodin's colleagues at other stations also came in for praise.

Ctea Rosli wrote of "an Indian lady at Jurong East MRT wearing specs", who "will always be standing at the control station n greet 'good morning' to everyone..seeing her everyday just brighten up my day every single day!"

Lina Jay thanked a "sweet lady" at Raffles Place station for her "genuine smiles", adding that "I would like to give thumbs up to an Indian uncle in Bugis Downtown line that will always gives directions to alighting passengers cheerfully".

"She'll greet the zombified passengers with a warm smile and greeting of 'good morning' even though nobody bothers to even reply or smile in return. Unfortunately I did not notice her name. But she definitely made an impression. Great job!"

SMRT said service ambassador Zainodin Abdul Hadi, 65, has been with the company for four years. 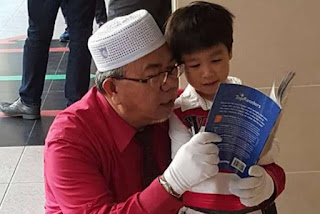 Sent from my iPhone
Posted by ChangCL's Site at 4:14 AM