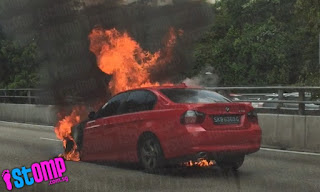 A red BMW burst into flames on the CTE near Ang Mo Kio at around 1.30pm this afternoon (April 17).

Stompers Veronica, Karthik, Cindy, Zen, Mr Lee, and Charaine alerted Stomp to the incident and provided photos of videos from the scene.

The fire was huge sending thick plumes of smoke that could be seen by motorists from a distance.

According to Charaine, three lanes were closed as firemen attended to the fire causing a massive jam on the CTE.

"SCDF was alerted to a fire involving the engine compartment of a car at CTE towards AYE after Balestier exit at about 1pm and deployed one fire engine and two red rhinos.

"The fire was swiftly extinguished by SCDF using one water jet.

"No one was injured.

"The cause of the fire is being investigated"

Sent from my iPhone
Posted by ChangCL's Site at 12:10 AM