SINGAPORE - Bakery chain PrimaDeli has apologised, and sacked a staff who allegedly made racist remarks to a candidate during a job interview.

Facebook user Sarah Carmariah had posted on Thursday (April 28) about going for a job interview on Monday at a "well-known halal bakery" for a position as a cake decorator.

She claimed that during the interview, the head of the department she was applying to made racist remarks towards her and was dismissive of the way she iced a cake.

In a statement yesterday (Friday) afternoon, PrimaDeli's management said: "It has been brought to our attention that a staff member has made discriminatory remarks to a potential candidate in a job interview.

"We take a very serious view and have a zero-tolerance policy for such behaviour. This employee has since been dismissed with immediate effect."

In her post, Ms Sarah said that her interview with a human resources representative went well, but things went downhill after she was introduced to the department head.

He told her: "From what I see, and the way you look, and not trying to be racist ah, but you Malay, I think you cannot la."

He also cast aspersions on Malay people, and asked if she spoke Mandarin, saying that that was the language most of his employees used.

Ms Sarah wrote: "I was stunned and I just froze. I felt my ears getting a little hot, but I didn't want to lose my cool. I was taken aback and didn't quite know how to respond anyway."

She then had to ice a cake under the supervision of another staff member, who could not speak English well and did not explain to her how he wanted the cake to look.

After the department head returned, he remarked: "Aiyo, cannot lah."

He then began a conversation with the other employee in Mandarin. At this point, Ms Sarah retrieved her copies of her portfolio, thanked them and left.

She added: "I have no intention of naming or shaming this organisation and its people, but I would like to highlight that racial discrimination in the job market is more real than we think. How can anyone judge another based on general racial stereotypes?"

In its statement, PrimaDeli said: "We have made personal contact to offer our sincere apologies to the candidate in question. We would also like to apologise to the wider community with regards to the circumstances.

"At PrimaDeli we believe in fair and equal rights for all at our company; we assess performance and suitability based on merit and achievements."

The national anti-discrimination watchdog, Tripartite Alliance for Fair and Progressive Employment Practices (Tafep), said it is trying to get in touch with the parties concerned to establish the facts of the case.

"Tafep would like to remind all employers that they are expected to abide by the principles of fair employment and adopt the good practices as stated in the Tripartite Guidelines on Fair Employment Practices. There is no place for discrimination in any form at the workplace," it added.

One in six of the 213 complaints lodged with Tafep last year were about race, language or religion. 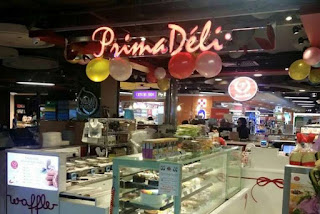 Sent from my iPhone
Posted by ChangCL's Site at 6:45 PM