Minister for Education Chan Chun Sing has addressed the matter.

Follow us on Telegram for the latest updates: https://t.me/mothershipsg

[Update on Jan. 11, 4:35pm: The Union of Security Employees (USE) has updated its Facebook post to indicate that the driver had a valid label to enter the school, but cut the queue of waiting cars. It previously stated that the driver did not have a valid car label.]

A Bentley driver has found himself a national topic after attempting to force his way into a school, even driving his vehicle into a security guard in the process.

A video of the incident was circulated on social media on the morning of Jan. 11.

In the 20-second clip, a woman was seen arguing with a male school staff, before entering the passenger seat of the car.

Meanwhile, the school security guard blocks the vehicle's way by standing flush against the front bumper of the car.

However, the driver starts moving forward, pushing the security guard backwards—even while the woman was getting into the car.

The security guard leans his knees onto the car's bumper as he is forced to walk backwards, but the driver was undeterred and speeds up slightly.

The security guard almost falls, putting his weight against the car hood to regain balance, with the other hand on his thigh.

The guard then waves for other pedestrians to cross the road.

According to online reports, the car is a white Bentley driven by a man aged between 50 and 60.

The man apparently insisted on entering the school with an invalid car plate, and threatened to run down the security guard.

The driver held up traffic for 15 minutes, and the staff supposedly gave up arguing with the man and let him onto the premises.

His car plate number, seen in other screen captures of the incident, is not found on the OneMotoring website.

Looking into the matter

Minister for Education Chan Chun Sing put up a Facebook post saying that the ministry is looking into the case and "will not hesitate to make a police report if warranted".

When Mothership went down to Red Swastika School at around 12:30pm, the situation was calm, and a different security guard who was on duty declined to comment further.

Mothership has reached out to the school for a comment.

Sent from my iPhone
Posted by ChangCL's Site at 5:46 AM No comments:


Sent from my iPhone
Posted by ChangCL's Site at 9:30 PM No comments: 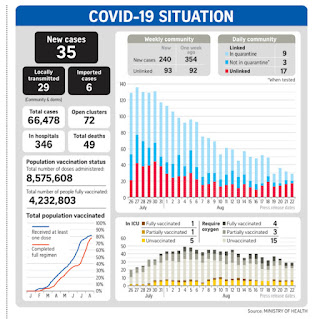 SINGAPORE - An understanding of economics and finance provides a valuable foundation for lifelong learning and can be applied to real-world problems, said Deputy Prime Minister Heng Swee Keat on Sunday (July 25) as he encouraged young people here to develop and deepen their interest in the topic.

Speaking at the final round of the virtual National Economics and Financial Management Challenge, Mr Heng said the basics of economics and finance can be applied to public policy, for example to address climate change or changing demographics in Singapore and globally.

"The discourse is not just theoretical, but it can lead to better outcomes that can improve the lives of billions of people on earth," he said.

The challenge was organised by the National University of Singapore's Economics Society to make pre-tertiary education students become interested and appreciate economics and finance.

Now in its 14th year, the challenge began this month with two earlier rounds that tested the participants' knowledge of tertiary-level economics and their ability to create a video applying economic and financial theories to an everyday life topic.

Sunday's round included a case study and presentation segment, where teams were given 1½ hours to work on a case question, and a buzzer round that tests participants' general knowledge.

Mr Heng also addressed concerns young people here might have about their future, given the uncertainty of the Covid-19 pandemic.

He said: "I believe that while Covid-19 has closed some doors, it has also opened many new ones. The post-Covid-19 world will be quite different from the one before, but it will be no less exciting."

He noted that Covid-19 has accelerated structural changes that were already in motion, including the digital revolution and the renewed emphasis on environmental sustainability.

"Our youth are well-placed to seek out these new opportunities," he said.

Mr Heng added that the value of understanding economics goes beyond being prepared for the job market.

He said: "I believe economics can help each of us to make better choices - for ourselves and for our society. I hope that you will continue to deepen your interest in economics and finance, and use this knowledge to become active citizens and make a difference.

"This is the spirit of Singapore Together, where we can all play a part in building a better shared future."

Sent from my iPhone
Posted by ChangCL's Site at 1:59 AM No comments:

NP lecturer in racist remark incident: Poly says it would not hesitate to take disciplinary actions


Sent from my iPhone
Posted by ChangCL's Site at 3:50 AM No comments:

G7: 'Mount Recyclemore' of leaders made from electronic waste in Cornwall - BBC News

G7: 'Mount Recyclemore' of leaders made from electronic waste in Cornwall

A sculpture of the G7 leaders shaped like Mount Rushmore made of electronic waste has been erected in Cornwall ahead of the G7 Summit.

It has been named "Mount Recyclemore" and bids to highlight the damage caused by the disposal of electronic devices.

Sculptor Joe Rush said he hoped it would show they needed to be made more easily reusable or recyclable.

He said: "It needs to be repairable or made to last longer because the stuff is going into landfill."

Mr Rush, who was commissioned to create the artwork by musicMagpie, explained the highly-visible location for his piece was chosen across the water from the Carbis Bay Hotel, where the summit is due to take place this weekend, in the hope those depicted would notice "when they fly over".

"We have this looking at them and hopefully we're going to prick their conscience and make them realise they're all together in this waste business.

"The key message is 'talk to each other' and let's sort this mess out," Mr Rush added.

The BBC is not responsible for the content of external sites.

Sent from my iPhone
Posted by ChangCL's Site at 10:53 PM No comments: 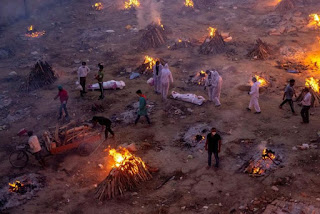 BENGALURU (REUTERS) - India reported on Thursday (June 10) the highest single-day death toll from Covid-19 in the world, at 6,148, after a big eastern state revised its figures to account for people who succumbed to the disease at home or in private hospitals.

The health department of Bihar, one of India's poorest states, revised its total Covid-19 related death toll on Wednesday to more than 9,400 from about 5,400.

Sent from my iPhone
Posted by ChangCL's Site at 10:34 PM No comments: