Dealing with a loss of faith 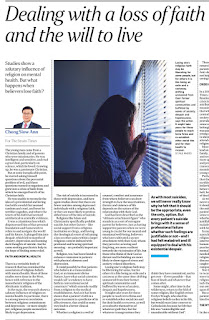 Posted by ChangCL's Site at 7:40 PM No comments: 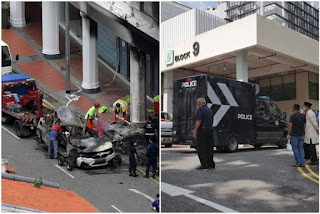 SINGAPORE - The six victims of a fatal crash in Tanjong Pagar on Saturday (Feb 13) had one common link - all had at one time worked as representatives for Aviva Financial Advisers.

Of the five men who died, four were financial advisers at the firm. They are: Mr Jonathan Long and Mr Eugene Yap, both 29, Mr Elvin Tan Yong Hao, 28, as well as Mr Teo Qi Xiang, 26.

The four were in a BMW M4 coupe with Mr Gary Wong Hong Chieh, 29, who was a former representative for Aviva Financial Advisers, when the car slammed into the front of a vacant shophouse and burst into flames at about 5.40am.

The driver of the white BMW is believed to be Mr Long.

His girlfriend, Ms Raybe Oh Siew Huey, 26, suffered severe burns after trying to save the men and is now in a critical condition.

She had also worked for Aviva Financial Advisers before she became an air stewardess.

In a statement to The Straits Times, Aviva Financial Advisers said it was saddened to learn that those who died in the crash were either current or former representatives.

"We wish to express our deepest condolences to their loved ones, and will assist the families in every way we can," it said.

"Grief counsellors are also being arranged to help their colleagues cope with the loss during these sad times."

Details about those involved in the crash emerged on Saturday as messages of shock and condolences poured in from friends and family on social media.

According to past media reports, Mr Yap was a co-founder of the local bubble tea chain Bober Tea and opened the brand's first store here in June 2018 with Mr Joseph Oh and Mr Gabriel Kok.

Since then, the homegrown label has expanded in Singapore to eight outlets, with franchises also opening in Manila and California.

Mr Yap's Instagram profile also said that he was a wealth manager with Aviva Financial Advisers.

Social media posts showed that he and Mr Long had taken a trip to the United States together in February last year. He was also pictured with sports cars and supercars in some of these posts.

Mr Long worked for Aviva Financial Advisers as a senior financial services manager, according to his social media profiles which have been taken down. Mr Long, who graduated from RMIT University at the SIM Global Education campus with an economics and finance degree, can also be seen posing with sports cars, including a blue BMW, in some of his photos.

Mr Wong was long-time friends with Mr Long and Mr Tan. He had studied IT at the Singapore Management University before starting a career in financial services.

A 2019 Instagram post showed that he had also worked for Aviva Financial Advisers then, and had received certificates of achievement signed by Mr Long.

According to his social media posts, Mr Wong was also involved in volunteer work during the Covid-19 pandemic last year.

In May, he wrote on Facebook that he and Mr Long had bought thousands of face masks for distribution to needy families.

"Packing everything was really tiring but it will be worth it after all. Stay safe everyone, Covid-19 will be over sooner or later," the caption read.

A Facebook user, who identified herself as Mr Wong's sister, said on Saturday that her brother had a big heart, cared for his family and loved to help the needy.

"But this morning, God took him away from us," she wrote.

Sent from my iPhone
Posted by ChangCL's Site at 5:43 PM No comments: 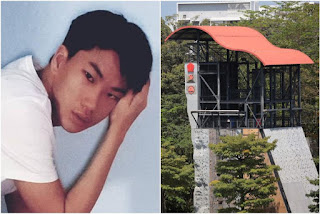 ACS(I) teen who died after Safra Yishun accident was 'a loving son and caring friend': Family

SINGAPORE - He was a sensible and mature boy who loved his family and friends deeply.

But on Thursday (Feb 4), Jethro Puah, 15, a student from Anglo-Chinese School (Independent), died after an accident at Safra Yishun.

The police said he lost his footing during a high-element activity at about 2pm on Wednesday and was "suspended by the safety harness" in mid-air.

In a statement to The Straits Times on Friday, Jethro's family said he was an only child who was among the top in class academically, and was also a caring friend who prayed for those around him when they were going through difficult times.

"He was a loving son, an exemplary student, a caring friend and a class chairperson," said the statement.

"He has lived such an impactful and fruitful life. Short as it may be, more importantly, it was very purposeful and completed."

His parents said they would always do things together as a family.

"It's hard to let go because we had such a close bond with Jethro," they said.

"More than a son, he was a close friend who communicated openly and we mutually supported one another in the family unit. We know this is not a goodbye, as we will see him again in our heavenly home."

Speaking to the media outside the wake at Singapore Casket in Lavender Street, his aunt, Madam Betsy Lee, in her 70s, said Jethro was musically inclined.

"I remember him singing hymns so beautifully, and he had an excellent tenor voice," she said. "He also enjoyed playing the violin and guitar."

"While other teens were staring at handphones in social gatherings, Jethro would reach out genuinely to engage others and ask how they were doing," she said.

"He was exceptionally mature and thoughtful for this age."

The family has requested privacy, and said they are still in shock and grieving.

Jethro had lost consciousness while suspended in the air, and paramedics from the Singapore Civil Defence Force tried to resuscitate him at the scene before taking him to KTPH.

He was taking part in the school activity organised by Camelot, an outdoor adventure learning company, which is now assisting in investigations.

The police said investigations are ongoing, but that no foul play has been suggested.

The Ministry of Education (MOE) and ACS(I) said in a joint statement on Thursday evening that they were greatly saddened by Jethro's death.

"Together, we are working closely to give our fullest support to the family as well as the student's classmates and teachers during this trying time," they said.

"The safety of our students has always been a priority for us, and we are working with the police and relevant parties to investigate the incident."

The MOE has suspended all outdoor activities involving heights for all schools until investigations into the incident are completed.

All activities at Safra Yishun's adventure sports centre have also been temporarily suspended.

Education Minister Lawrence Wong posted on Facebook that his heart goes out to Jethro's parents and friends.

He said: "To his family members and loved ones, my deepest condolences and sympathies. To his friends and classmates - be strong.

"As a school, as a community, we are with you. Know that you can reach out to your teachers and counsellors any time.

"My thoughts and prayers are with all of you during these difficult times."

Jethro's wake will be held until next Tuesday, with the cremation at Mandai Crematorium scheduled for just past noon.

Sent from my iPhone
Posted by ChangCL's Site at 4:46 PM No comments: