He lost 18kg in six months 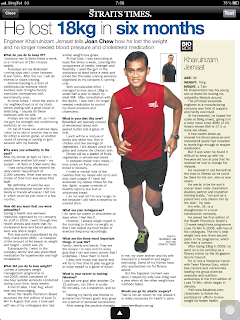 Posted by ChangCL's Site at 5:03 PM No comments:

EDUCATION Minister Heng Swee Keat announced a new Edusave award last Thursday - one that he hopes will encourage character building in young Singaporeans. Teachers will nominate students for the annual Edusave Character Awards to be given to those who demonstrate exemplary values and civic responsibility through their behaviour and actions.

Mr Heng announced that the ministry will also increase the value and double the number of Eagles awards. These are given to those who display leadership or excel in non-academic work, such as in co-curricular activities. About 17,000 students receive the award now. The sums will be raised: from $150 and $200 to sums between $250 and $500, for primary pupils all the way to Institute of Technical Education students.

Like most people who have commented on the initiatives, I welcome the Eagles award for recognising students who excel in the non-academic areas.

I also welcome the principle behind the new character education awards, as this allows schools to recognise exemplary behaviour and hold up role models. As an Education Ministry spokesman said: 'Similar to the other Edusave awards, the monetary award serves as encouragement but is not meant to reduce character and values to a dollar figure.'

But having a cash amount for such an award may inadvertently end up doing exactly that - raising a citizen who expects cash for good behaviour. It sends all the wrong signals.

First, cash rewards turn good behaviour into work. It sends the message that if they are paid for it, then it must be work. Students may also conclude that showing kindness must be difficult or noteworthy, as they are rewarded for it.

A school principal related the instances of good behaviour for which some of her students were rewarded with book vouchers. One student was rewarded for helping an old lady cross the road. Another, for helping a classmate on crutches.

'Aren't these acts of kindness something that should come naturally to all your students? Why the need to reward them with vouchers?' I asked her.

I hope the character education awards given out to students will not be for acts such as returning money found in the school field or helping a disabled classmate. I was brought up to believe that helping others was my duty - and would be loath to have a new generation taught that helping others deserves a cash award.

Giving money to students for character and good behaviour also creates in students a sense of entitlement: They may come to expect to be paid for doing something they should already be doing. It could lead them to expect rewards and recognition when they follow school rules or don't talk in class.

Worst of all, cash rewards cheapen the intrinsic motivation to do good. Good behaviour carries its own reward because it offers students self-respect, confidence, and the feeling of being part of a class grouping or school body that needs and appreciates them.

Rather than resort to giving money, schools and parents can be a little more creative in coming up with ways to reward exemplary behaviour.

Most psychologists and parenting experts would agree that giving recognition encourages desirable behaviour.

Schools and parents can capitalise on young people's natural desire to be praised and get recognition, by highlighting exemplary deeds in class or in the community, and holding up such students as role models to their peers.

A very simple device for teachers is to write a note home, as my primary school teacher used to do. If I performed a good deed, my teacher would note my good behaviour in a 'character report card', to take home to my parents. The teacher would write down in detail what I did and attach a gold star to it.

I still remember how thrilled I was to receive one of these notes for helping a classmate in composition writing.

There was the initial presentation of the note in class, which brought applause and appreciation from my classmates. Psychologists will say that the use of such group rituals is a very good way of recognising and rewarding desirable behaviour.

A second round of positive stroking came when I went home and showed my parents the note. And because it was displayed on the dining table, I received further praise and reinforcement when friends and relatives visited my home.

Buoyed by that experience, I started offering free English tuition to my classmate and her two siblings regularly.

It was a simple note, but one that had real value that lasted. I suspect the feeling would have been different if I had been given money or a book voucher.

Cash is not always the best way to recognise students for their efforts.

As it is, many schools already have simple, effective ways to promote good, kindly behaviour - such as awarding students collar pins and certificates.

Some school heads have said they intend to keep their school-based awards that recognise character and good behaviour, and make the Edusave cash awards the pinnacle awards. This is wise.

I would go even further. I would prefer the ministry to keep its cash awards and come up with other more meaningful ways to recognise good values. For a start, they can encourage schools to come up with school-level awards and fund programmes that do this.

And for the Ministry of Education (MOE)-level Edusave Character Awards, a trophy or medal might suffice. It could be presented at an annual ceremony, perhaps with a video or a booklet that documents some noteworthy acts of character or that shares inspiring stories of students' good or brave deeds.

There is no shortage of creative ways to recognise character and promote the inculcation of good values in schools.

A cash cheque is not the best option.

Sent from my iPad
Posted by ChangCL's Site at 7:30 PM No comments:

Posted by ChangCL's Site at 2:28 PM No comments:

Ways older adults can get active

Posted by ChangCL's Site at 4:10 PM No comments: