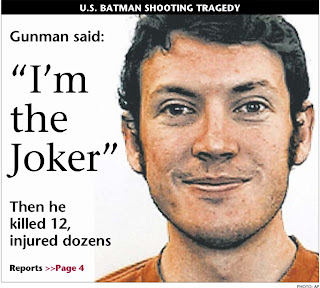 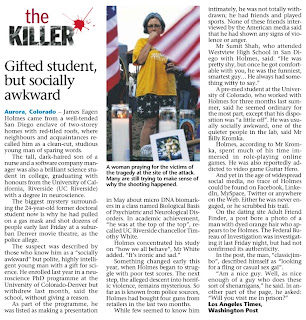 Posted by ChangCL's Site at 7:23 PM No comments:

Notes about an inconvenient truth 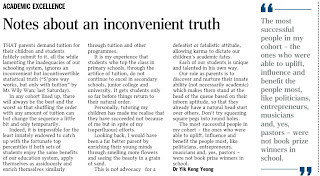 Posted by ChangCL's Site at 5:17 AM No comments: 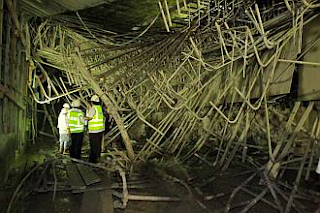 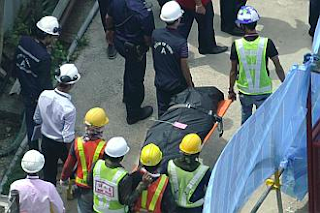 RESCUERS waded waist-deep in liquid concrete yesterday as they fought to extricate the bodies of two Chinese nationals who were killed when a partially built roof collapsed at Bugis MRT station.

They faced a race against time to retrieve the dead workers as the cement began to harden.

Nine Singapore Civil Defence Force (SCDF) officers were taken to hospital with chemical burns on their limbs caused by exposure to additives in the concrete.

Our rescuers have to manoeuvre through wet cement that could be as high as waist level.

- SCDF incident commander Lieutenant-Colonel Ling Kok Yong. SCDF officers arrived at the scene before 7.30am, and took four hours to find and extricate the body of the first worker because of the mangled steel scaffolding, timber from the roof mould and liquid concrete. The second body was brought to the surface some nine hours after the collapse.

Disaster struck at about 7am, just as the final truckloads of concrete were pumped into the roof of the underground walkway.

The temporary scaffolding beneath it buckled, bringing down the structure and trapping the two men.

It took four hours to find the first victim and remove his body, which was submerged in the wet cement 15m beneath the ground. The second body, which was pinned under scaffolding beams, was brought to the surface nine hours after the collapse.

Construction sources said the two victims should not have been under the roof when it was being cast.

The Straits Times understands that the series of steel scaffolding had been designed to hold at least 480 tonnes of wet concrete, about 20 per cent more than the amount to be poured into the mould.

Yesterday, the Ministry of Manpower issued a stop work order for the site while the cause of the collapse is investigated. Minister of State for National Development and Manpower Tan Chuan-Jin, who visited the scene, said it was 'a serious accident, but it is localised'.

He added that buildings and infrastructure in the vicinity are safe. The ministry will conduct a detailed investigation.

A Chinese embassy spokesman confirmed two Chinese nationals died. The injured workers were taken to Raffles Hospital. Five have been discharged while three are being kept in for observation.

Only the day before the collapse, Solentache Bachy - a main contractor for the Downtown Line Bugis station - was awarded silver at the Workplace Safety and Health Awards.

The stretch of the Downtown Line containing Bugis station is due to open late next year. The authority said the accident will not affect the completion deadline. 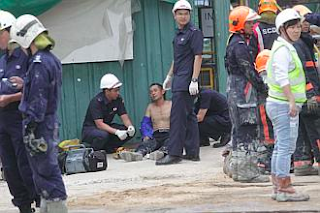 Both men were later found dead following the collapse of a partially built concrete roof during construction at Bugis station.

The workers were inside scaffolding holding up the structure, said the Land Transport Authority (LTA). When it gave way at 6.50am, metal and wet cement rained down on them.

The accident took place at an underground walkway that will connect the upcoming Downtown Line 1's Bugis MRT station with the existing Bugis station on the East-West Line.

SCDF officers had to manoeuvre in waist-deep cement and comb, by hand, an area spanning 30m by 5m to look for both bodies.

They found the first worker's body fully submerged at 10.40am, several hours after they arrived at the site. The officers took about an hour to manually scoop away partially hardened cement before they could extricate the body.

The second body was found fully submerged in partially hardened cement at 12.45pm, 1m away from the first. It was also pinned down by steel scaffolding and wooden planks.

Officers from the SCDF's elite Disaster Assistance and Rescue Team (Dart) had to first remove the planks before using oxyacetylene torches to cut through multiple, intertwined scaffolding bars.

SCDF Lieutenant-Colonel Ling Kok Yong said: 'They have to slowly cut through each of these scaffolding bars, which is a long and tedious process.'

Officers had to carefully slice one bar at a time to avoid damaging the body. They retrieved the second body at 4.05pm. Both workers were from China.

A spokesman for the Chinese embassy said that it was notified by the construction company Sin Herh that two Chinese workers had died in the accident, and that another was injured.

He confirmed that the two dead workers were from Anhui and Jiangsu provinces, and that Sin Herh has already notified their families, who are making arrangements to travel to Singapore.

Eight workers were also injured yesterday while pouring cement into the roof's mould before it gave way.

One of them, Mr Abul Basher Abul Hashem, who is in his 30s, told The Straits Times he was standing on top of the scaffolding when he felt 'cement moving'.

He said he jumped off right before it collapsed and injured his right little finger when he grabbed something for support.

His friend Mohammed Faruk, 40, said Mr Basher told him he could see the bone on the middle segment of the finger.

Mr Basher also complained of severe shoulder and hip pains. His nephew, Mr Jalal Uddin, 27, said he did not want to inform the family at home for fear of 'making everyone cry'. He added that Mr Basher has a son who is not yet a year old.

The eight casualties - six Bangladeshis, one Indian and one Chinese - were taken to Raffles Hospital by ambulance between 7am and 7.30am, said an LTA spokesman. Five were treated and discharged while the other three were admitted for chest, finger and back injuries and will be discharged today.

Several workers, some still in safety vests, arrived from 10am to noon to visit the injured.

Yesterday's tragedy is the worst MRT construction accident since four workers were killed in 2004 when part of Nicoll Highway collapsed while the Circle Line was being built.

In both cases, a temporary structure collapsed.

Minister of State for Transport Josephine Teo yesterday said the latest accident was unfortunate but isolated, and that the public 'need not be overly concerned and draw parallels to previous incidents'. 'They are not of the same scale,' she said.

S'pore way works, but only with tuition

MS YEO Boon Eng argues that our education system facilitates social mobility, and therefore should be maintained as it is ('Tough Singapore way works'; Wednesday).

I beg to differ.

I do not believe that any Singaporean is asking for our system to be dumbed down. What many parents want is a more balanced and rounded education that prepares our children effectively for the future, yet allows them time to play and develop holistically, and gives families time to bond.

The fact that a few exceptional students from lower-income families can succeed despite the current system is not proof that our education system facilitates social mobility.

How can we tell ourselves that all students stand an equal chance of moving up the social ladder, when success in our education system is highly dependent on the extra tuition and enrichment lessons that wealthier parents can afford and poorer parents cannot?

Because of the way our education system is structured and operated, students from lower-income families cannot compete equally with those from better-off families.

That, in principle, is unacceptable.

If our education system is as effective as we like to believe, then we might ask ourselves why so many children need so much extra tutoring at every level.

There is no point having 'free' education when families must spend thousands of dollars more to supplement what is being taught in school, so that their children can cope.

In fact, it would be interesting to find out how Singapore would fare in international educational rankings if we selected children who have not had the benefit of external tutoring to sit the ranking tests.

We must review how our education system operates.

As a nation, we need to be willing to spend more money on education.

We need to have smaller classes and more age-appropriate testing, and discourage the 'tuition' mindset and unhealthy competition, especially among primary schools, for the 'top school' label, as well as stop our obsession with international rankings.

Our schools and their top managements must refocus on the core purpose of education - to educate our children academically and as social beings, and to ensure that every Singaporean child has an equal shot at future success, regardless of whether his family can afford tuition.

Taken verbatim from:
http://www.straitstimes.com/STForum/Story/STIStory_822110.html
Posted by ChangCL's Site at 8:33 PM No comments:

Posted by ChangCL's Site at 3:30 AM No comments:

WHEN a bus they were travelling in careened off the road and hurtled down an embankment in Malaysia, two Singapore Scouts sprang into action to help passengers.
For their selfless act, Scout volunteers Edieusdi Ahmad, 22, and Jason Lim Yu, 25, were yesterday conferred the Medal of Courage by the Singapore Scout Association - the first time these medals, a newly created category, have been awarded.
They got the medals from President Tony Tan Keng Yam - Chief Scout of Singapore - at a ceremony in the Istana, along with 94 other individuals and corporations recognised for their contributions to the movement here.

STRENGTH OF CHARACTER
To us, what matters is that we saved someone else's life, not so much the recognition.
- Scout volunteer Edieusdi Ahmad
The duo were part of a troop of nine Scouts returning from Terengganu to Singapore in July last year after finishing a turtle conservation project when the accident occurred before dawn.
'Everyone was panicking, especially since it happened when the passengers were all asleep,' said Mr Edieusdi, who has just finished national service.
The bus had flipped onto its side and was lying precariously on a steep slope, but the duo worked in darkness to lead passengers to safety before tending to those injured.
Mr Lim, an auditor with accounting firm KPMG, carried an injured woman up the slope to the road, where the Scout team gave first aid to the hurt.
Both Scouts then scrambled back down to the bus - despite the danger of it becoming dislodged - to check that no one had been left behind.
The accolades are secondary, said Mr Edieusdi. 'To us, what matters is that we saved someone else's life, not so much the recognition.'
It is this strength of character fostered by Scout training that led retired couple John and Lydia Ewing-Chow to donate $50,000 to the Singapore Scout Foundation, despite neither of them having been Scouts in their youth. Recognised for their contribution yesterday, the couple praised the Scout movement for nurturing young people with initiative and resourcefulness. 'You name it, the Scouts have it,' said Mr Ewing-Chow, 69.
DAVID EE

Posted by ChangCL's Site at 4:59 PM No comments: