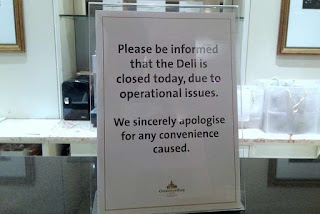 Goodwood Park Hotel's bakery has had its food establishment licence suspended after 76 cases of food poisoning were linked to its popular durian pastries.

The Ministry of Health (MOH) and National Environment Agency (NEA) investigated after the first incident was reported on March 15.

The ministry inspected the bakery after a second incident was reported on April 4. Joint investigations were conducted by the Agri-Food & Veterinary Authority (AVA), MOH and NEA on April 13 after more incidents were reported.

Though lapses in food handling were discovered, there were no hygiene lapses or pests found. The AVA also did not find lapses in safety from food suppliers.

Stool samples from the affected parties as well as food handlers are currently being screened by MOH, and only handlers who have been certified medically fit will resume work after the bakery reopens.

All food handlers will also be required to retake and pass the Basic Food Hygiene course.

The hotel is required to clean and sanitise the bakery, including equipment, utensils, work surfaces and toilets, as well as rectify the identified food preparation lapses.

Goodwood Park Hotel has apologised to its guests and said it is cooperating with the agencies. "We would like to assure the public and all our guests that we treat all matters relating to food safety standards very seriously," it said in a Facebook post, adding that it is sourcing alternatives to the affected desserts from "reputable establishments".

The latest news has shocked both patrons and food critics.

"Goodwood Park's durian pastries, especially the puffs, are dependably good and the hotel comes up with new offerings every year, so this comes as a real surprise," said Ms Tan Hsueh Yun, food editor for The Straits Times Life section.

Public relations executive and fan of Goodwood Park's pastries, Mr Jonathan Lim, 29, said he will give them another go if the licence is renewed, but added: "This is quite disappointing."

Sent from my iPhone
Posted by ChangCL's Site at 9:45 PM