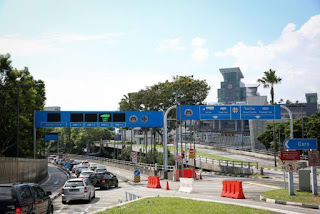 The duo were fellow AETOS officers at Woodlands Checkpoint when they were nabbed last month, said the Ministry of Home Affairs on Tuesday (June 20).

Muhammad Khairul Mohamed, 24, has since been detained for planning to travel to Syria to fight against the Syrian government, while Mohamad Rizal Wahid, 36, is placed on a Restriction Order for supporting his plan, the ministry added in its statement.

News of their arrests come one week after the ministry said last Monday that a 22-year-old has become the first Singaporean woman to be detained for radicalism under the ISA.

Syaikhah Izzah Zahrah Al Ansari, an infant care assistant, was planning to travel to Syria with her child to become a "martyr's widow", fighting for the Islamic State in Iraq and Syria (ISIS).

Auxiliary police officers are private contractors hired to do police duties such as carrying out security checks at buildings and crowd control.

The uniformed officers have powers similar to that of police officers while on duty. These include carrying out a search and making an arrest.

Some are armed with revolvers.

The ministry, however, said Khairul's duties did not require him to be armed.

He was working as an outrider at the checkpoint, performing traffic enforcement duties when he was arrested.

The ministry said he became radicalised in 2012 after he went online to gather information about the conflict in Syria.

"He developed the view that the conflict in Syria was a sectarian struggle between Sunni Islam and Shia Islam, and being a Sunni Muslim, he wanted to fight against the Shi'ites in Syria by joining the Free Syrian Army (FSA)," the ministry said.

It noted that the FSA is formed by Syrian Armed Forces defectors who are fighting the Syrian government.

"Khairul perceived the Syrian conflict to be a "holy war" in which he was prepared to die in battle as a "martyr" and receive divine rewards," the MHA added.

"At the point of his arrest, Khairul was still interested to join FSA or any other militant groups operating in Syria and engage in armed violence there," the ministry said. "His readiness and proclivity to resort to violence in pursuit of a religious cause makes him a security threat to Singapore."

His colleague Rizal was working as an armed officer conducting general security duties at the checkpoint when he was arrested.

He knew about his colleague's plan to travel to Syria to fight, the ministry said, but he "not only failed to bring the matter to the attention of the authorities or the AETOS management, he even suggested to Khairul various ways to get to Syria and die there as a 'martyr'".

While he did not share the same desire to take part in armed violence, "as an auxiliary police officer, he should have been aware of the prevailing terrorism threat and his failure to dissuade Khairul and report him to his superior officer was a serious lapse of judgement", the ministry said.

He was placed on a restriction order that curtails his movements and activities.

"The Government takes a serious view of anyone who supports, promotes, undertakes or makes preparations to undertake armed violence, regardless of how they rationalise such violence ideologically, or where the violence takes place.

"This is particularly so if the person involved is a public servant, and especially if he or she is a uniformed officer," the ministry said.

It also stressed again the need for families and friends to report those whom they suspect to have been radicalised. "In the case of Khairul, several relatives and friends knew of his intention to fight in Syria, but none of them came forward," the ministry said.

Home Affairs and Law Minister K. Shanmugam told reporters after a closed-door media briefing on Tuesday that Khairul was vetted by the authorities when he joined AETOS in 2015.

But the vetting process would not have picked up the intentions, said Mr Shanmugam.

"There were no obvious signs and it would have been difficult to have picked it up," he added.

Mr Shanmugam urged employers not to single out Malay employees for closer scrutiny.

"It would be very wrong to suggest that employers start vetting Muslim candidates in a different way. That will have the very opposite effect of what (they) want."

Minister-in-charge of Muslim Affairs Yaacob Ibrahim, commenting on the arrests in a Facebook post, said: "The new cases underscore once again the important role of parents, religious teachers, and the community at large to look out for each other, and to immediately refer any signs of radicalisation to Islamic Religious Council of Singapore (Muis), Religious Rehabilitation Group (RRG) or the police. This is the best and only way to help a loved one before it is too late."

He noted that Khairul's parents and relatives had known about his intentions, but "did not take them seriously".

"We cannot take the threat of radicalisation lightly, and merely hope that someone can grow out of it," said Dr Yaacob, who is Minister of Information and Communications.

He added that the two men's beliefs in armed violence are drawn from a misguided hatred of others. "This is not the Islam that we know and love. We strongly condemn the ideology espoused by extremists who abuse Islam to justify violence and terror, even during Ramadan," he said.

Sent from my iPhone
Posted by ChangCL's Site at 4:08 AM