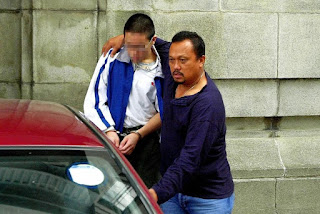 A smiling mastermind who engineered his own wife's murder, Anthony Ler had coached a lanky bespectacled 15-year-old and twisted the boy's mind into killing his victim in 2001.

Sixteen years after he was detained at the President's pleasure, the teenage killer, now 31, has applied to President Halimah Yacob for clemency, and to be released. He is hoping to have his life back.

To be detained at the President's pleasure is to be jailed for an indefinite term, subject to a periodic review.

During the trial in 2001, the teenager, identified only as Z, was described by the presiding judge as "a rather simple-minded and mild-mannered boy ensnared haplessly way out of season in adult intrigue and machinations... He was no killer and had too much conscience and compassion".

Ler, on the other hand, was a master manipulator who wore a smile that never faded.

In his book, the late lawyer Subhas Anandan, who represented Ler, described him as a man who wore a constant smile, which in reality was a sneer.

Ler conjured up a series of stories to protect himself, and maintained throughout a trial which gripped Singapore that he never intended for the teenager to actually kill his wife, Ms Annie Leong. It was a joke gone wrong, he said.

But both were found guilty. Ler was sent to the gallows on Dec 13, 2002, and Z, who did not appeal against his sentence on his lawyer's advice, has been serving an indefinite jail term since.

His lawyer Peter Ong Lip Cheng, who submitted the petition for him, said the 31-year-old has done well while serving time, matured considerably and has been studying for a degree while in prison.

Speaking to The Sunday Times yesterday, he added that the application, which the Istana received on Nov 17, has been supported by counsellors, friends and others in contact with him during his term in prison. Z's identity was not publicised then as he was a juvenile when the crime was committed.

Mr Ong, speaking from Chongqing, China, where he is attending a course, said: "He has consistently shown remorse, maturity and understanding of what he has done. If given the chance, he would also be a standing and active testimony to youths of the consequences of crime, and share his personal story in redeeming himself."

Z knifed Ms Leong, a 30-year-old insurance agent, as instructed by Ler, her estranged husband. It happened on the fourth-floor lift landing of a Housing Board block in Hougang on May 14, 2001. She died later in hospital from multiple knife wounds to her neck and chest.

Investigations showed Ler had approached Z and his teenage friends, but of the lot, Z felt he had to prove himself to Ler.

Ler, a self-confessed gambler and womaniser, wanted to retain the HDB flat he and Ms Leong owned, and custody of their daughter, who was then four years old. She would be 20 now.

Then Judicial Commissioner Tay Yong Kwang, who heard the case, said during the trial that "Anthony Ler hatched the idea of killing his wife, taught Z how to do it cleanly, kept egging him on and finally practically forced him to commit the offence".

Z's admissions of "self-loathing and utter confusion after the murder" were accepted by the court.

In his statements to the police when confessing to the crime, Z had written: "How I wished that I had never known Anthony. I have let my parents down and all those people around me. I do not know how people would think of me. I feel very lost and confused."

Mr Ong said Z's remorse and desire to change have been borne out by his work in prison in the last 16 years. He has been a model inmate with no record of misbehaviour.

Among other things, he has studied diligently through to his A levels and encouraged others to study and improve themselves as well. He also maintained close ties with his family in letters which showed character growth, he added.

Mr Ong, who was one of two lawyers defending Z during the 2001 trial, said Z has evolved from being the naive and weak-minded boy then to a resilient young man today, eager to make amends for his wrongdoings.

He said a 2003 Singapore report to a United Nations committee of convicted persons below the age of 18 detained at the President's leasure showed they can be considered for release after serving about 13 years of imprisonment.

"This appeal is timely but it is not merely about the time served so far, but also on the evidence of his growth, maturity and readiness to contribute to society."

The Anthony Ler trial in 2001 made headlines, not only because he hired a 15-year-old to kill his estranged wife Annie Leong, but also for the show he put on to hide his crime.

Ms Leong, 30, was stabbed multiple times outside a lift on the fourth floor of the Housing Board block where she was living with her mother and daughter.

At her wake, Ler sat down with a New Paper reporter and admitted to being a bad husband. He said that he had "fouled up" their marriage with an affair and his gambling. He said that his wife was an angel, while he was the devil.

But Ler insisted that he was innocent.

Two days after the interview, Ler, then 34, was arrested at his Pasir Ris home and it emerged that he had offered a secondary school student $100,000 to kill Ms Leong, and even coached him on how to stab her in the neck.

Ler was sentenced to death, and hanged on Dec 13, 2002. The student, because of his age, was spared the death penalty and detained indefinitely at the President's pleasure.