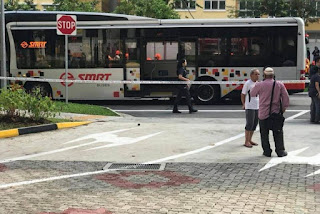 SINGAPORE - A six-year-old boy died in hospital on Thursday (May 24), after he was pinned under an SMRT bus while crossing the road in Choa Chu Kang.

The Singapore Civil Defence Force (SCDF) said that it used lifting equipment to rescue a boy who was trapped under a bus. The Straits Times understands that the boy was found under the rear wheel of the bus.

The six-year-old boy was taken unconscious to National University Hospital, where he later died from his injuries, police said.

The bus driver, a 57-year-old man, is assisting the police with investigations.

Immigration consultant Charlie Lim told ST that he was driving out of the carpark when he saw the accident in front of Block 486.

"The boy was extracted from below the bus and sent up the ambulance," said Mr Lim, 44. "There was a lot of blood flowing under the bus."

He added that the boy's mother was seen standing next to the bus and appeared to be in a state of shock as she was being comforted by a group of friends and police officers.

Choa Chua Kang resident Dereth Tang, 40, said that he heard a screech coming from the block across his home.

"The screech was not loud, and it was the screaming and shouting that caught my attention," said Mr Tang, who is unemployed.

He called the ambulance and went down to take a look.

SMRT told commuters at 10.15am via its SMRT Connect app that bus service 983 will skip three bus stops along Choa Chu Kang Avenue 5 and 6 due to an accident.

In response to queries, SMRT vice-president of corporate communications Margaret Teo said that the transport operator is sorry and sad that the accident has happened.

"Our care team has reached out to the boy's family at the hospital to provide support and assistance," she said. "Meanwhile, we are assisting the police in their investigations."

SMRT also apologised to commuters who were affected.

The police has urged the public not to circulate images or videos of the boy at the accident scene out of respect for his family.

Sent from my iPhone
Posted by ChangCL's Site at 3:32 AM