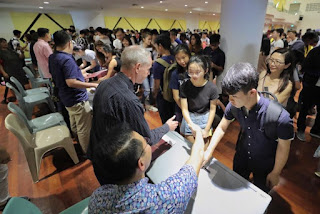 SINGAPORE - Amid a Covid-19 pandemic which has disrupted learning, students from Singapore who sat the International Baccalaureate (IB) diploma exams last November have managed to outshine their global counterparts again.

The Switzerland-based IB Organisation, which conducts the exams, said Singapore produced 55 of the 99 perfect scorers - more than half - this year.

The average scores of Singapore students were also higher than those of their global and regional counterparts: 38.35 points against 29.81 and 34.83 respectively.

More than half - 50.65 per cent - of Singapore students also scored 40 points and above, out of 45. In comparison, 11.63 per cent of global students and 27.66 per cent of Asia-Pacific students achieved the same result.

On Monday (Jan 4), students from eight schools - including Anglo-Chinese School (Independent), School of the Arts and St Joseph's Institution - received their results.

All 443 students in ACS(I) - the first Singapore school to offer the IB diploma since it was accredited in 2005 - passed the IB exam. Their average score was 41.8 points, with 363 of them obtaining 40 points and above.

The school did not release the number of its students who achieved the perfect score of 45.

At Hwa Chong International School, 99.3 per cent of its 144-strong cohort passed the exam, with an average score of 37. Six students obtained 44 points.

SJI said 99.3 per cent of its 272 students in the diploma programme passed as well, with an average score of 40.3. There were 184 students who attained at least 40 points.

SJI International saw all 183 graduates in the cohort pass, with an average of 37.7 points.

Religious school Madrasah Aljunied Al-Islamiah's first batch of 25 students in the diploma programme passed the exams as well. The highest score achieved was 42 points, while the school's average score was 34.8 points.

Meanwhile at Sota, all 157 students in the cohort passed too. Those in the diploma programme obtained an average score of 38.7 points, with more than half of them scoring 39 points and above.

One Sota visual arts student, Mr Izz Muhammad Ahmad, said that the circuit breaker period earlier this year due to the pandemic gave him more time to complete his assessments at home.

While this also meant there was less time for lessons, which was a challenge as there were some subjects he felt he needed real life interaction to learn better, the 18-year-old managed to overcome this by arranging for consultations and asking his peers for help.

"Every situation has multiple perspectives to it. There may be good and bad aspects of it, and we should look for the good ones and figure out a way to lessen the bad ones," he said.

"I am extremely proud for all our new diploma programme and career-related programme graduates," said Dr Kumari, who sets the strategic direction of the IB. She assumed the post in 2014.

The IB Organisation noted that due to prolonged Covid-19 uncertainties, schools had been provided with a choice of options for their students, including awarding grades using written examinations if they could be sat safely and an alternative route using coursework and predicted grades.

Schools could also consider deferring to the May 2021 session with no additional cost or withdrawing from the IB November session with a full refund.

The organisation said that 73 per cent of the IB world schools were able to administer the exams using local guidelines for safe exam administration.

The remaining 27 per cent had not been able to administer the exams as a result of governmental mandate or local conditions.

"The IB ensured that student grades are fair, valid and comparable irrespective of whether their school was able to run examinations or not," said the organisation, adding that appropriate grade boundaries had been set to account for global disruptions in learning and teaching as well as "other unusual circumstances that might have affected performance".

Students facing adverse circumstances over and above the pandemic were also supported on a case-by-case basis, the organisation added.

The IB Diploma Programme is a two-year programme conducted at 27 institutions in total in Singapore. IB qualifications are recognised by universities across the globe.

In Singapore, some students from other schools sat the first round of exams in May last year, and received their results earlier in July.

Sent from my iPhone
Posted by ChangCL's Site at 2:52 AM