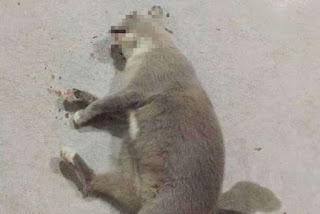 SINGAPORE - A 25-year-old man believed to be responsible for abusing a cat at Block 884, Tampines Street 83, was arrested on Tuesday (May 31) in a joint operation involving the police and the Agri-Food and Veterinary Authority of Singapore (AVA).

He is assisting the AVA in investigations.

A grey Siamese cat had been found at the block with blood oozing from its mouth last Wednesday. It had been "slammed on the ground twice" and "burned with a lighter", said the Cat Welfare Society on Facebook.

AVA officers commenced investigations after being alerted to the case last Thursday at 2.46am, it said in a statement on Wednesday.

The cat carcass was collected for a post-mortem examination and surveillance was conducted in the area.

Once the identity of the suspect was established with police assistance, he was arrested along Tampines Street 84 on Tuesday at about 1.30am.

AVA said safeguarding animal welfare is a shared social responsibility which requires the cooperation of all stakeholders, including the public.

Mr Joshua Teoh, deputy director of AVA's Animal Management Group, said: "Members of the public approached us during our surveillance to share information on the suspect.

"We are heartened by their civic-mindedness. The information provided helped us to establish the identity of the suspect quickly."

Under the Animals and Birds Act, anyone found guilty of animal cruelty can be fined up to $15,000 or jailed up to 18 months, or both, for the first offence. For subsequent offences, the maximum penalty is $30,000 or a jail term of up to three years, or both.

Sent from my iPhone
Posted by ChangCL's Site at 3:02 AM