TOKYO – Japan has lifted all tsunami advisories issued it had issued for its north-east coast, after a powerful earthquake struck off the coast of Fukushima at 5.59am local time (4.49am in Singapore).

The Japan Meteorological Agency initially said that the quake measured 7.3 but later revised it to 7.4, with the epicentre at a depth of 25km. The US Geological Survey, however, has downgraded the quake to 6.9, according to Reuters.

The quake generated tsunami waves, with the highest from a 140cm tsunami observed in Sendai at around 8am local time, NHK said.

More tsunami waves were also reported elsewhere, including an 80cm wave at Ishinomaki at 8.11am. Earlier, a 60cm wave struck Onahama port in Fukushima at 6.49am, followed by another 90cm wave that struck Soma just after 7am.

"The tsunami advisory has been lifted," the Japan Meteorological Agency said in a statement released on its website at 12.50pm local time several hours after it issued alerts.

Tsunami warnings were earlier issued to the Fukushima and Miyagi prefectures, but they were downgraded to a tsunami advisory, with people advised to stay away from coastal areas.

The government had also issued tsunami advisories for the Iwate and Ibaraki prefectures.

The Japan Meteorological Agency has warned that more waves – of up to 3m in height – may be expected. The epicentre of the earthquake, which was felt in Tokyo, was at a depth of about 10km, said the agency.

There were no immediate reports of damage, but five people were slightly injured. A 63-year-old woman in Iwaki fell off from her bed and injured her shoulder, while a 65 year-old woman in Miyagi sprained her ankle while evacuating. Kyodo news also reported that one woman suffered cuts to her head from falling dishes. 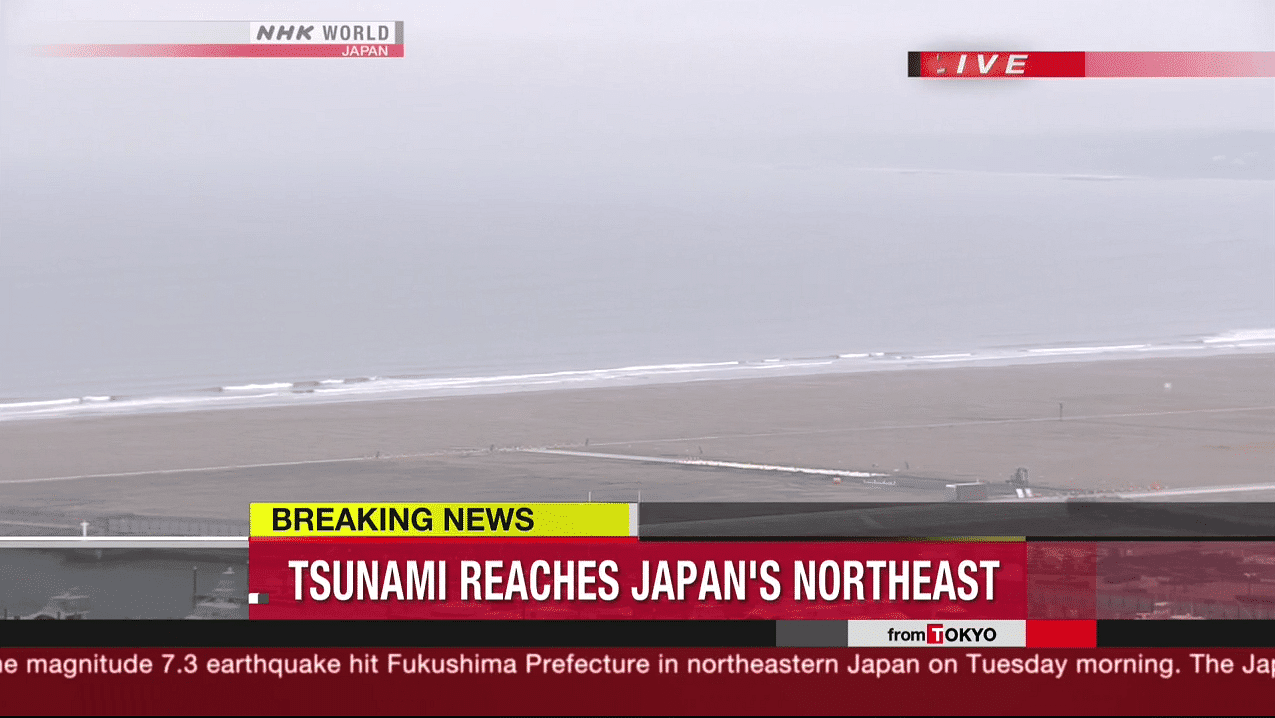 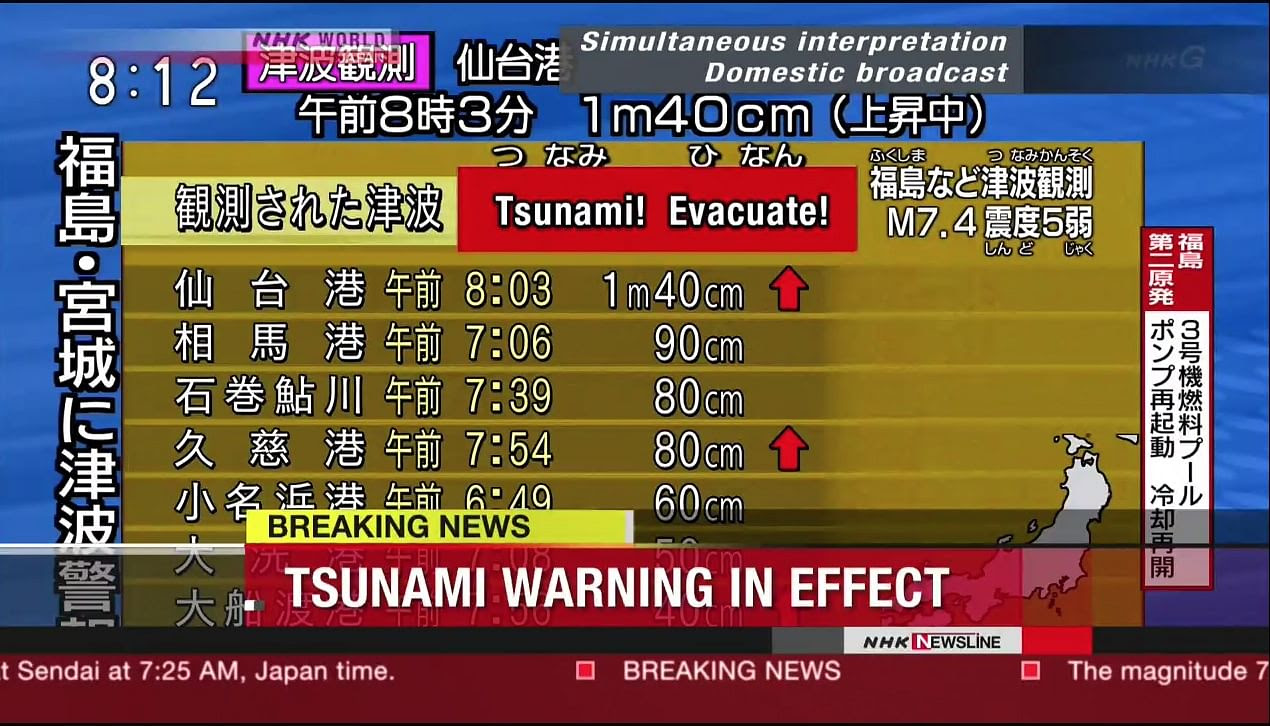 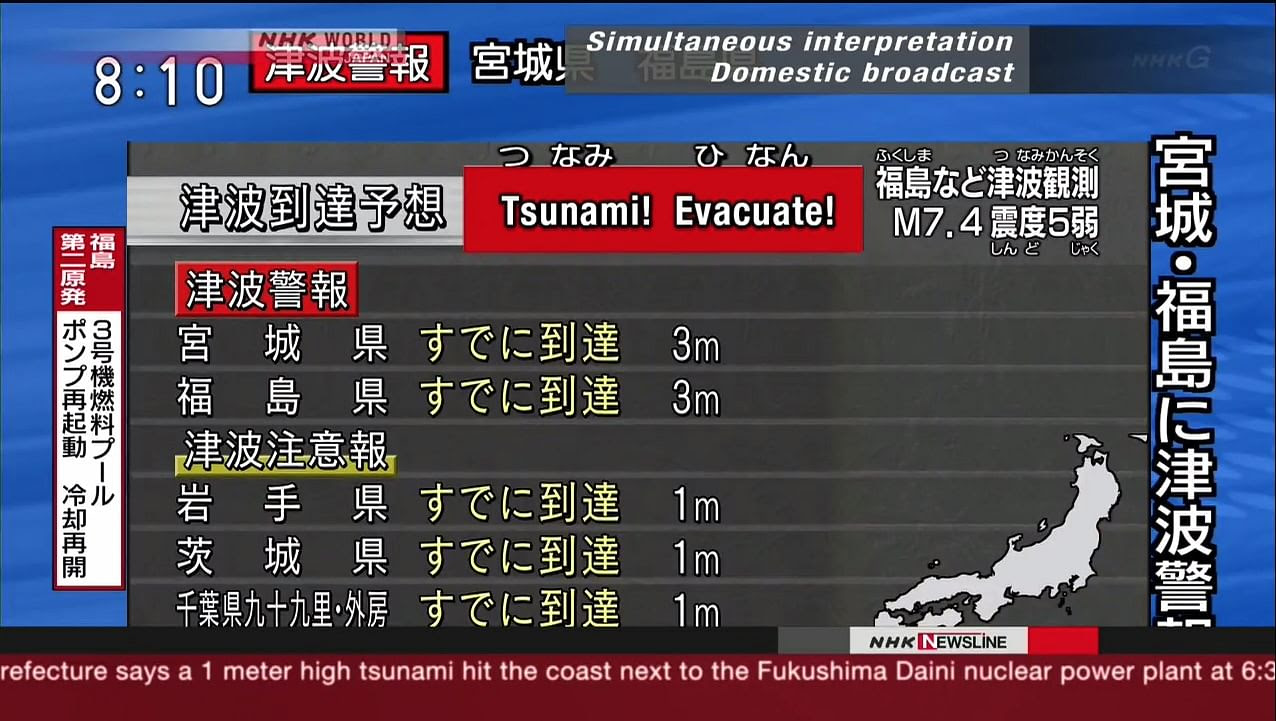 No abnormalities found at #TEPCO's #Nuclear Power Stations after Magnitude 7.3 #earthquake off the coast of #Fukushima at 5:59JST Nov 22.

Prime Minister Shinzo Abe, speaking in Buenos Aires where he is on an official visit, said he was monitoring the situation and will take all appropriate measures to rescue affected residents.

Top government spokesman, Chief Cabinet Secretary Yoshihide Suga, said at a press conference that Mr Abe has instructed the Cabinet to issue accurate information to residents, and carry out rescue operations where needed.

He added that there have not been any reports of significant quake damage or serious injuries.

The government immediately established a task force and liaison office in the Cabinet Office after the earthquake struck, he said. He urged residents to keep themselves informed and evacuate if they live in the areas where tsunami warnings have been issued for. 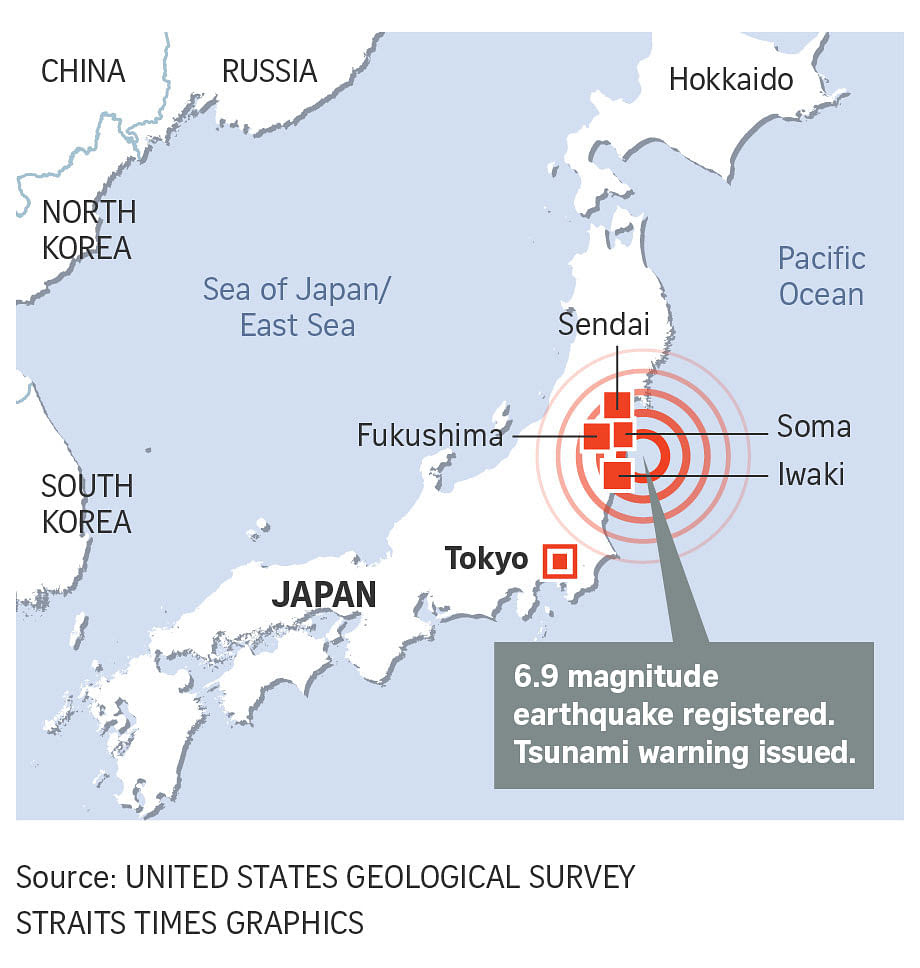 Tsunami warning sirens in Iwaki city in Fukushima could be heard in the background of live footage by national broadcaster NHK shortly after the quake. It reported that a tsunami was observed 20km off the coast of Iwaki, and asked those by the coast to "not be complacent and evacuate right away", and to not return home until the warnings have been fully lifted.

Fukushima prefecture was one of the most heavily hit when a magnitude 9.0 quake struck on March 11, 2011, triggering a 10m tsunami that smashed into the north-east Japan coast. It crippled the Fukushima Dai-ichi power plant, causing meltdowns in three of the reactors in one of the worst nuclear disasters to date. Some 18,500 people died or are missing in the disaster, and another 174,000 residents were displaced.

Following the latest quake, Tokyo Electric Power Company (Tepco) officials said there were "no irregularities" at the Dai-ichi power plant, and there were also "no change in radiation levels". Tepco earlier said the cooling system for a storage pool for spent nuclear fuel at the reactor for the adjacent Fukushima Daini Plant had been halted, but a spokesman later said the cooling system restarted soon after.

There was a fire at a petroleum complex in Iwaki, which has since been extinguished.

Aftershocks were also reported following the quake, with a 4.9 magnitude tremor registered in Fukushima prefecture at around 10.38am local time. Earlier, magnitude 5.4 tremor hit off Fukushima at 6.10am.

The initial shock also rattled buildings about 240km away in Tokyo.

Since the Fukushima disaster, all nuclear plants on the coast that could be hit by a tsunami have been shut down.

Sent from my iPhone
Posted by ChangCL's Site at 10:25 PM