SINGAPORE - Singapore sits at the top in a new index that measures Asian economies' ability to transform themselves amid digital disruptions brought about by the likes of Chinese e-commerce giant Alibaba and United States-based ride-hailing firm Uber.

The study by The Economist Intelligence Unit (EIU) is based on 20 wide-ranging indicators including infocomm technology expenses, 4G network coverage, broadband affordability, the quality of maths and science education, digital partnerships and the ease of accessing government data online. The study of 11 Asian economies was commissioned by Australian telco Telstra. 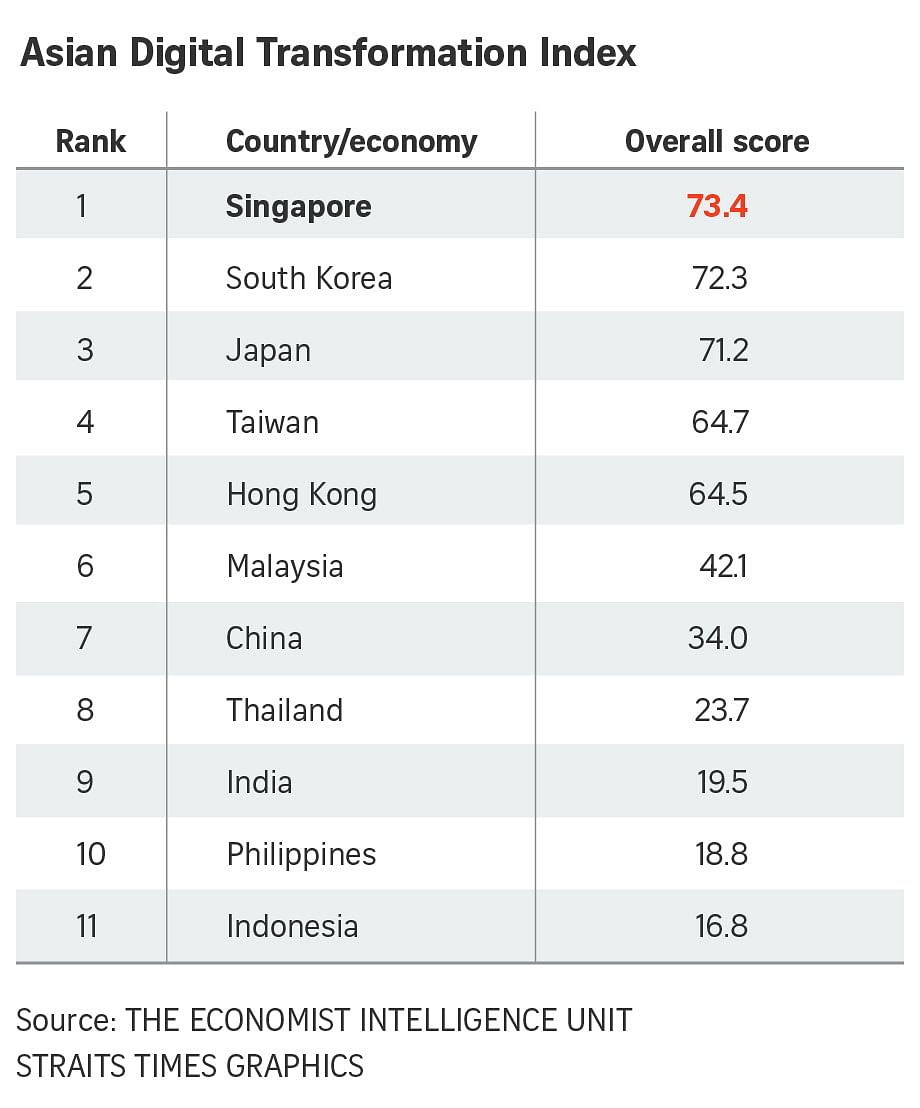 Mr Charles Ross, senior technology editor at EIU in Asia, said Singapore aced the infrastructure-related indicators - which carry a higher combined weighting of 55 per cent in the index - due to its smart nation push.

"Digital infrastructure is seen as the first hurdle... because if companies can't get connected then the other elements of the digital transformation process will be beyond them," said Mr Ross.

Letting Massachusetts Institute of Technology (MIT) spinoff nuTonomy put its tests of driverless taxis on local streets was cited in the study as an example that would push the envelope for smart vehicle development in Singapore.

But nuTonomy last month (October) put its trials on hold after one of its self-driving cars hit a lorry in Biopolis Drive at one-north.

Other self-driving trials by Singapore government agency A*Star, Britain-based automotive supplier Delphi and the Singapore-MIT Alliance for Research and Technology are still taking place in the one-north area.

For instance, birth rate and yearly carbon monoxide emission can be retrieved from data.gov.sg, the one-stop venue for a wide range of free government datasets.

The study also pointed out that Singapore could improve on bridging the digital divide to get the elderly, disabled and the needy to use the Internet. Singapore lags South Korea, Japan and Hong Kong on this front.

Sent from my iPhone
Posted by ChangCL's Site at 2:46 AM