Meureudu, a small town in Pidie Jaya regency, was the focus of rescue efforts after a massive 6.5-magnitude earthquake hit Aceh province yesterday.

Hundreds of local residents were seen on live TV digging through the debris of a collapsed building with their bare hands looking for survivors, in the immediate aftermath of the quake, before rescuers arrived.

The building, which comprised several units of shophouses, was reduced to rubble within seconds of the powerful quake striking at 5.03am local time (6.03am Singapore time).

Given the time, it is likely that many people are buried under the rubble of their homes, said rescuers.

"The main challenge is that many victims are under layers of very thick rubble," said Pidie regency disaster management agency chief Apriadi yesterday. "Hopes are not high as it has now been hours since the quake, but we are doing our utmost to save every life." 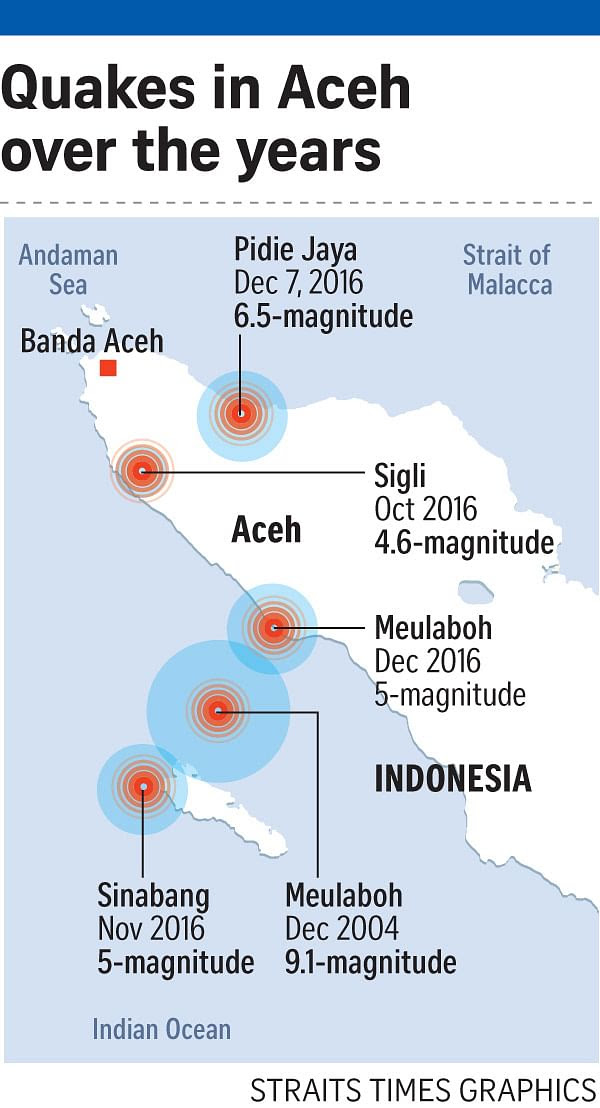 The National Disaster Management Agency (BNPB) said at least 94 people have been killed, with 128 seriously injured, in the earthquake yesterday.

"Pidie Jaya Hospital, near the epicentre, is badly damaged, and can take only some patients," said Mr Apriadi. "But many are also being moved outdoors due to an overflowing number of earthquake victims."

Many patients were also transferred from Pidie Jaya to hospitals in the nearby towns of Pidie and Sigli, as overwhelmed hospital staff struggled to attend to the wounded.

The Straits Times understands that Pidie Jaya Hospital can handle about 400 patients, while the hospital in Sigli can take in about 300. The hospital in Pidie could not be reached yesterday.

Pidie Jaya regent Aiyub Abbas yesterday confirmed reports from hospital workers that they are not just struggling with a shortage of staff and beds, but also medical supplies.

He added that shelter, food and water are also desperately needed by his town now.

The BNPB said about 280 buildings - including homes, shophouses, schools and mosques - have collapsed. The high number has prompted many to question why more was not done to reinforce buildings in the quake-prone area.

Dr Sutopo Nugroho, who heads the data and information division at BNPB, said as many as 148 million Indonesians live in areas prone to moderate to strong earthquakes.

Vice-President Jusuf Kalla said that after Aceh was hit by a deadly tsunami in 2004, the government trained local officials to help residents build earthquake-resistant homes. "But that didn't work, because they either got complacent or the people didn't have enough money, so going forward, we have to monitor this strictly."

Two officers from the Singapore Civil Defence Force will be heading to Aceh today for a week. They are part of a five-man Asean Emergency Response and Assessment Team which will assess the critical resources - such as tents, medical kits and sanitation facilities - needed in the areas affected by the quake.

Sent from my iPhone
Posted by ChangCL's Site at 10:56 PM