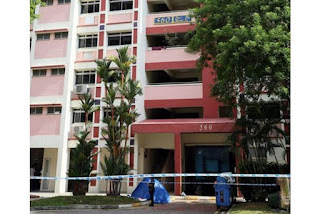 SINGAPORE - A man was found dead at the foot of a Housing Board block in Pasir Ris on Sunday (Aug 20), and a woman believed to be his daughter was later found lying motionless in a flat in the same block.

The police told The Straits Times that they were alerted to a case of unnatural death at Block 560, Pasir Ris Street 51, at 1.30pm on Sunday.

They were both pronounced dead by paramedics at the scene.

ST understands that the woman is the man's daughter. She was found with multiple stab wounds.

Sent from my iPhone
Posted by ChangCL's Site at 7:52 AM