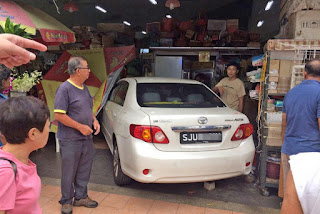 SINGAPORE - A school vice-principal has been sentenced to 10 days' jail for ploughing his car into a market in Marine Parade and hurting three people.

In response to queries from The Straits Times, a Ministry of Education (MOE) spokesman said Lim is an MOE staff member, and the ministry "will review the case based on our internal disciplinary processes".

"MOE takes a serious view of misconduct by our staff, and will not hesitate to take disciplinary action against those who fail to adhere to our standards of conduct and discipline," said the spokesman.

Deputy Public Prosecutor (DPP) Angela Ang told the court that Lim was trying to reverse his car into a parking space at the carpark at Block 50A Marine Terrace at 12.34pm on Dec 9 last year when the car bumped into the kerb.

He switched gears to drive forward but failed to maintain control over the vehicle, causing it to surge forward. The car mounted a kerb and crashed head-on into a florist's stall in Marine Terrace Market, and struck three people who were in the stall.

A 66-year-old man was flung aside and landed on his back, while the impact of the crash left two women, aged 58 and 33, unconscious.

All three were taken to Changi General Hospital by ambulance.

The man's left foot was crushed from the impact of the collision, causing him permanent disability. The middle toe on his left foot had to be amputated, said DPP Ang.

Due to his now permanently deformed foot, he may develop pain in the foot from prolonged walking, running and standing, the court heard.

The 58-year-old woman suffered a fracture in her right ankle and also injured her right shoulder, while the 33-year-old suffered giddiness and an abrasion on one finger on her right hand.

DPP Ang added that an inspection conducted on Lim's car showed that there was no mechanical fault or abnormality in the vehicle.

The volume of traffic was light at the time of the accident and the weather was fine, with a dry road surface and clear visibility.

For causing grievous hurt through a negligent act, Lim could have been jailed for up to two years, and fined up to $5,000.