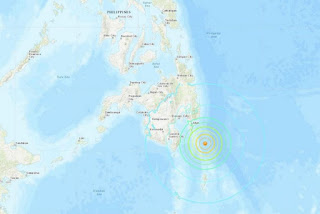 MANILA (AFP) - A 6.9-magnitude earthquake struck off the southern Philippine island of Mindanao on Saturday (Dec 29), monitors said, adding that a tsunami threat was possible for parts of the Philippines and neighbouring Indonesia.

The quake struck southeast of Davao City at a depth of 59km, the US Geological Survey said, while the Pacific Tsunami Warning Centre said "hazardous tsunami waves from this earthquake are possible" along the coasts of Indonesia and the Philippines.

"Hazardous tsunami waves from this earthquake are possible within 300 km of the epicentre along the coasts of Indonesia and the Philippines," the Pacific Tsunami Warning Center said.

There was no tsunami threat to the US state of Hawaii, it said.

The USGS initially said the magnitude of the quake was 7.2 but later downgraded it to 6.9.

Sent from my iPhone
Posted by ChangCL's Site at 8:38 PM