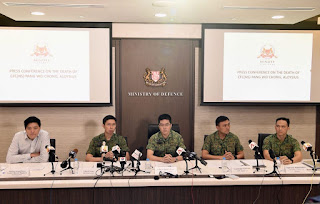 For four years leading up to August 2017, the Singapore Armed Forces (SAF) had a clean record of zero operations-and training-related fatalities.

It was a hard-earned achievement in the light of a terrible 2012, when four SAF servicemen died in separate training incidents in that year alone.

The four years of zero fatalities was an achievement held up by Defence Minister Ng Eng Hen in August 2017 at an appreciation dinner for volunteers who had contributed to national defence.

Attributing the record to the impact of the External Review Panel on SAF Safety (ERPSS) that was set up in 2013, Dr Ng said: "The contributions of this panel have had the impact of saving lives."

But since then, the SAF has seen five fatal incidents.

It began with Third Sergeant Gavin Chan who died in September 2017 in an exercise in Australia after a Bionix tank he was commanding overturned on a steep embankment.

This was followed by Corporal First Class (CFC) Dave Lee's death from heatstroke on April 30 last year after completing an 8km fast march in Bedok Camp.

Third Warrant Officer Muhammad Sadikin died after he was hit by a falling tree branch in October last year while supervising maintenance work in Brunei. Last November, CFC Liu Kai died after a Bionix armoured vehicle reversed into a Land Rover he was driving as part of a field training exercise in the Jalan Murai training area.

The latest is actor Aloysius Pang, an operationally ready national serviceman (NSman) who died on Wednesday from injuries suffered when he was crushed by a lowering gun barrel while carrying out repair work inside a howitzer.

With each incident, public concern over SAF safety standards has intensified. The latest incident involving the high-profile death of the actor has cast a harsh spotlight on the issue.

The SAF top brass have defended the armed forces' safety systems as being sound and robust, though they also recognise there is room for improvement.

The unprecedented move by the SAF in lowering its training tempo across all services - announced by Chief of Defence Force Melvyn Ong on Thursday - shows a recognition by the military leadership that such incidents have to stop.

Still, some serious questions need to be asked.

First, is there a culture of complacency that might have slipped in after the four years of zero fatalities?

After all, the latest incident means that the five fatalities now run the full gamut of SAF personnel types: regulars, NSmen and full-time national servicemen (NSFs).

The incidents have occurred in a wide range of scenarios: From training in camp, to participating in overseas exercises, to doing repair work. Does the full range of personnel types and scenarios show that the problem of slipping safety standards runs deep and wide across the SAF?

Also, the move in lowering the current training tempo - which refers to the duration, intensity and frequency of training activities - raises the question of whether it has been climbing to an unsustainable level over the past years.

While the relationship between training tempo and training safety is unclear, has the SAF nevertheless effectively kept watch over this issue?

Third, have the recommendations by the various safety review panels, including the first ERPSS, been effectively implemented?

The panel was set up following the spate of incidents in 2012 that led to a number of deaths.

These included a 21-year-old NSF who died from an allergic reaction to fumes from smoke grenades, and a 20-year-old NSF who was killed when his jeep overturned. Another NSF, aged 20, drowned in Brunei in August that year during a river crossing training exercise.

After a three-year review, the panel found that SAF commanders strongly emphasised safety in their training and invested substantially in safety, and that the SAF management systems were sound and aligned with external industry standards. But it also cited areas that could be improved, like promoting the open reporting of accidents.

On this front, Dr Ng told Parliament last August, following CFC Lee's death, that the SAF would strengthen open reporting, where servicemen will be encouraged to report unauthorised activities through a hotline.

He reiterated in a Facebook post on Thursday that if any SAF soldier detects an unsafe practice, he should inform his commander or stop training to protect himself or his buddies. "No one needs to fear any disciplinary action for doing right to protect lives during training," he added.

It was reported last August that the army safety hotline has received about 50 calls every year since it was set up in 2011.

Have more calls been made since then? Could more regular updates be provided on the implementation of other safety recommendations to boost public confidence that the actions taken were effective?

To be fair, the SAF has adopted a more targeted approach to investigating the causes in the recent incidents. For instance, it has set up independent panels to study vehicular safety and heat injury management following the deaths of 3SG Chan and CFC Lee, respectively.

But clearly, more needs to be done to investigate if there is a fundamental and common root cause behind the recent poor safety record. A second ERPSS convened in July 2017, which is in the middle of its work, should look deeper into the safety culture.

The SAF has shown that it can get things right, based on the four years of zero fatalities. What it needs to do is to study what went right then and what has gone wrong since 2017.

A lot is at stake.

This, in turn, might lead to a dip in public confidence, which is crucial to an armed forces where citizen soldiers make up the majority of its manpower.

Sent from my iPhone
Posted by ChangCL's Site at 5:55 PM