From Compass Point to 1 Sengkang Mall to Compass One: Renamed mall set to reopen in Q3 of 2016, Singapore News & Top Stories - The Straits Times

From Compass Point to 1 Sengkang Mall to Compass One: Renamed mall set to reopen in Q3 of 2016, Singapore News & Top Stories - The Straits Times 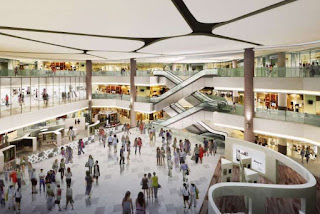 From Compass Point to 1 Sengkang Mall to Compass One: Renamed mall set to reopen in Q3 of 2016

SINGAPORE - Suburban mall Compass Point in Sengkang, which closed in October last year for a facelift, has been given a new name closer to the original when it reopens to the public later this year.

The revamped Compass One will feature an enlarged public library over two levels, more than 50 new retailers and newly-improved amenities such as a children's playground, the mall's owner, M&G Real Estate, announced in a press release last week.

The mall was in the news last December when it held a naming contest on social media, with the winner awarded a $1,000 cash prize.

But the name that was picked - 1 Sengkang Mall - was criticised for being boring and lacking in creativity. Many also requested that the mall retain its original name.

On why the management decided on the second name change, M&G told The Straits Times that it had been getting a lot of feedback from its customers who "miss the old name and want it back".

"So we have put Compass back in the name. But we also wanted to stick with our original plan to give the mall a new name to reflect a fresh, lively and vibrant experience that is going to be a step up from its predecessor," a spokesman said.

"So we have mixed the old and the new with Compass One. One is the address of the site and also reflects our ambition to make this the best shopping experience in the area."

In its press release, M&G revealed that 90 per cent of the retail space in the mall have been leased to tenants, well ahead of its targeted opening in the third quarter.

Mr Erle Spratt, manager of M&G's core Asia real estate investment strategy, said: "The substantial investment we have made to refurbish and upgrade the mall as well as acquiring full ownership demonstrates our long term confidence in the Sengkang suburban retail market.

"Closing the mall for the works shows our determination to deliver the improvements safely and efficiently to minimise inconvenience for residents. We look forward to continuing our partnership with retailers serving the Sengkang community and to welcoming back the residents of Sengkang when Compass One reopens later this year."

M&G Real Estate, the real estate fund management arm of M&G Investments, took full ownership of the mall in February. It had previously owned a majority stake since 2002.

Sent from my iPhone
Posted by ChangCL's Site at 3:28 AM