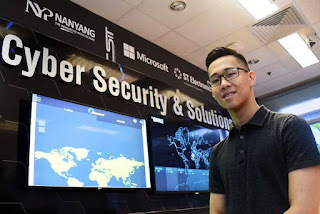 Harvard and MIT both want this poly graduate

When Mr Rayden Chia Yong Xiang got a letter of acceptance from the Massachusetts Institute of Technology (MIT) in March, he read it twice over to make sure it was real.

"I didn't dare to tell anyone... It sunk in a week later," said the graduate from Nanyang Polytechnic's (NYP) information security course.

He was doubly thrilled when, later in March, he learnt he had been accepted by Harvard University.

"I applied to MIT and Harvard on a whim," said the 22-year-old, who had secured a place at the National University of Singapore earlier.

I hope (my being accepted by Harvard and MIT) will serve as an inspiration for more poly students to try this route. Don't think that just because you don't have a JC background, that's not something you can do.

MR RAYDEN CHIA, who graduated from the information security course at Nanyang Polytechnic.

He was accepted by the first four, and has taken up MIT's offer after attending pre-orientation programmes held last month by MIT and Harvard. "(MIT) has more specificity in terms of what it offers... For what I want to study, it offers more depth and breadth."

He hopes to study computer science and engineering and do information technology research at MIT's Computer Science and Artificial Intelligence Laboratory. His tuition fees will be covered by a scholarship.

The polytechnics do not keep track of graduates admitted into the top universities in the United States or prestigious British institutions. But officials said it is rare for a polytechnic graduate to get offers from both Harvard and MIT.

For instance, the first and only Singapore Polytechnic graduate to get into Harvard is Mr Kuriakin Zeng back in 2010.

NYP said Mr Chia is likely to be its first graduate to be accepted by Harvard directly after finishing the diploma programme."I came from a background where almost everyone went to junior college... But I wanted a more unique experience and to get industry exposure," said Mr Chia, a Catholic High School alumnus who scored seven As at the O levels. "I hope (my being accepted by Harvard and MIT) will serve as an inspiration for more poly students to try this route.

"Don't think that just because you don't have a JC background, that's not something you can do."

The only child of a housewife and an engineer - the family lives in a flat in Bishan - said his interest in computing started at age nine, when he meddled with an old computer.

"It was a sandbox for me. It was how I picked up basic programming with the help of library books later on," said Mr Chia, who while in secondary school joined IT competitions run by the polytechnics.

His time at NYP confirmed his interest in IT security, and his team won first place in 2013 and 2014 in the Singapore Cyber Conquest.

His reward was two fully paid trips to the Black Hat Technical Security Conference in Las Vegas. It was also then that he extended his stay in the US to visit Stanford and University of California, Berkeley.

Mr Chia said: "I'm looking forward to stretching my mental faculties... and ultimately rediscovering myself. I guess that's what college is about."

Sent from my iPhone
Posted by ChangCL's Site at 10:41 PM