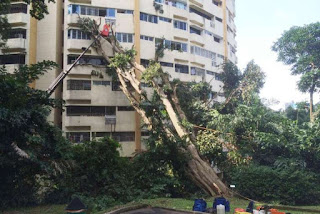 At least six apartments from the fourth to eighth floors were affected, Lianhe Wanbao reported.

Residents said that the loud crash as the tree's branches smashed their windows woke them up early on Sunday morning.

One of them, Mr Richard Irving, wrote on Facebook that " a sizeable limb from a tree" fell at 4.30am, making "a hell of a noise".

The National Parks Board (NParks) was informed and operations to clear the tree began soon after the incident.

It was cleared at about 3.30pm on Monday.

The tree, a Purple Millettia, was standing at Pearl's Hill City Park before the apartment block was completed in 1976, according to the NParks' website.

The evergreen tree has dark glossy leaves and reddish-purple flowers.

The only other Purple Millettia listed as a heritage tree is located in the Singapore Botanic Gardens. This specimen planted behind Swan Lake is more than 100 years old.