SINGAPORE - Singapore's population hit 5.61 million in June, growing by 1.3 per cent from the year before.

The growth in population came as more Singaporeans had babies last year, and more maids came here to work to take care of the growing number of elderly Singaporeans.

There were also more dependents on Long-Term Visit Passes also moved here to be with their Singaporean family members.

This snapshot of how the population is changing was given in the latest population figures released on Tuesday (Sept 27) by the National Population and Talent Division.

This year's Population in Brief report reflects the stable growth in both resident and foreigner populations over the past five years. It also shows a bumper crop of births last year, with 33,725 Singaporean citizens born in 2015.

This was the highest number of births in more than a decade - higher than even the 33,238 births in 2012, the auspicious Year of the Dragon for Chinese births.

The non-resident population grew by 2.5 per cent over the same period, to 1.67 million people. This growth came in part from foreign domestic workers and dependents on long-term visit passes, said the report.

Foreign employment growth remained low compared to the earlier part of the decade. 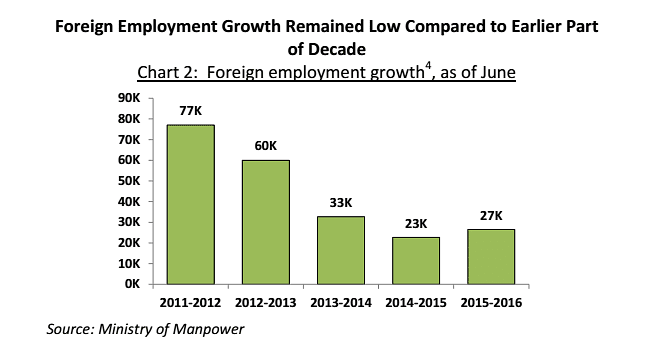 Sent from my iPhone
Posted by ChangCL's Site at 6:25 PM