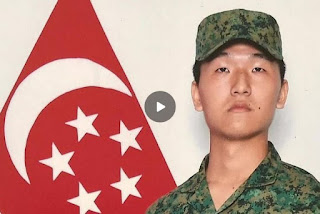 SINGAPORE - The Bionix armoured vehicle which collided into the Land Rover that Corporal First Class Liu Kai was driving, leading to his death, did not stop reversing despite repeated commands for its driver to do so, Defence Minister Ng Eng Hen revealed in Parliament on Monday (Feb 11).

In the Nov 3 accident, the Bionix Infantry Fighting Vehicle stopped only after it mounted the driver's side of the Land Rover - about eight seconds after it started reversing, said Dr Ng.

An independent Committee of Inquiry (COI), as well as the police, are looking into whether the communications equipment used by the Bionix crew was working properly at the time, he said.

Dr Ng added that it will be up to the Attorney-General's Chambers to decide if there are grounds to prosecute any person in the criminal courts for CFC Liu's death.

Even if there are no criminal proceedings, Dr Ng said the Ministry of Defence (Mindef) will take disciplinary measures for lapses identified in the military court and provide updates on them.

In the meantime, the servicemen involved in the incident have been redeployed to non-operational roles, and a series of safety measures have been put in place, he added.

These include installing additional emergency horn buttons and rear-view cameras in the Bionix armoured vehicles.

The minister was giving the preliminary findings of the Committee of Inquiry (COI), which was convened to look into circumstances leading to the death of the full-time national serviceman (NSF) on Nov 3 last year.

Dr Ng said the COI was able to piece together a "detailed chronology" from the recordings of the Land Rover's front and in-vehicle cameras, and statements from multiple witnesses.

On the day of the accident, he was assigned to drive an assessor from the Active Unit Training Centre - a regular Captain - who was the Land Rover's vehicle commander.

The officer was deployed to observe and evaluate exercise troops - in this case, the Bionix vehicle.

A Second Lieutenant was the vehicle commander; a Third Sergeant acted as the rear guide, when the vehicle reverses; and a Corporal each performed the role of gunner and driver.

The COI determined that the crew members were qualified to participate in the exercise, having received the requisite training for their roles, said Dr Ng.

A day before the incident, the captain met the Bionix's vehicle commander to understand his crew's manoeuvre plan for the exercise. Another meeting was held on Nov 3, before the exercise started.

Dr Ng said the COI felt the servicemen involved had their rest in accordance with training safety regulations, and their mental and physical states were fit for participation in the exercise which commenced at 7am in the Jalan Murai training area.

Just before 10am, the Bionix crew spotted several vehicles involved in the exercise passing a junction ahead of it.

The armoured vehicle then stopped, as ordered by the Bionix vehicle commander.

The Land Rover, which was following the Bionix to assess the crew's performance in the exercise, also stopped.

The trainer then instructed CFC Liu to overtake the Bionix, and as he moved forward slowly, he heard shots fired as part of the exercise.

CFC Liu then stopped the Land Rover at a maximum distance of 19.8m from the Bionix, the COI found.

This was short of the 30m safe distance as stated in the training safety regulations, said Dr Ng, adding that the COI noted that it was the responsibility of the Land Rover's vehicle commander to ensure the safety distance.

Four seconds after the Land Rover stopped, the Bionix crew reversed the vehicle in execution of the extrication drill ordered by the Bionix commander, as a response to the gunshots.

Dr Ng said the COI acknowledged the need for this type of training - an extrication drill for enemy encounters carried out to get away as fast as possible - even though it is high risk.

Almost immediately after the Bionix started reversing, the rear guide was seen gesturing at the Land Rover to move away. He was also seen pushing the microphone of his Combat Vehicle Crew (CVC) helmet closer to his mouth.

Demonstration of a Bionix emergency stop

He issued stop commands into his communications set repeatedly, but the Bionix continued to reverse.

Dr Ng said the COI noted that the rear guide had repeatedly given the order for the driver to stop reversing through the intercom via the CVC helmet.

He added that police investigations are also focused on the communications between the Bionix crew, and whether this was affected by the equipment.

The intercom via the CVC helmet is the rear guide's only means of communications with the other crew members in the Bionix, he said.

The Land Rover's video showed the trainer tapping CFC Liu and signalling for him to reverse the Land Rover.

CFC Liu also engaged the reverse gear, judging from the beep sounds. Both of them also shouted and gestured with their hands for the Bionix to stop.

The trainer also tried to reach for the handset of the radio set to communicate with the Bionix crew, but about eight seconds after it started reversing, the armoured vehicle hit the Land Rover and mounted the driver's side before stopping.

CFC Liu was trapped. The trainer managed to extricate himself and notify the exercise's conducting officer who immediately ordered the exercise to cease.

A medic on board a nearby Bionix immediately tended to CFC Liu. The SAF Emergency Ambulance Service, a unit medical officer and the Singapore Civil Defence Force were also activated and on site.

CFC Liu died from his injuries at about 10.35am. The cause of his death, as determined by post-mortem examination, was traumatic asphyxia, said Dr Ng.

The COI found there was adequate deployment of medics and medical equipment as part of the safety management plan, he added.

Dr Ng said the COI did not find any mechanical problems with the Bionix - its steering parts were "fully functional" - and that the Land Rover CFC Liu drove was serviceable.

In response to the COI's findings, Dr Ng said the SAF has or will put in place a number of measures to prevent the recurrence of such incidents, including some not identified by the COI.

From next month, the Bionix training fleet will be retrofitted with a rear-view camera system in phases.

The system provides a live video feed of the vehicle's rear to enhance the operator's situational awareness while in the vehicle during training and operations.

It is capable of operating in a low-light environment, with the video displayed on the 6.5-inch-wide display panel mounted in the operator's compartment.

Since November 2018, all Bionix vehicles used for training have had three emergency horns, and the vehicle's rear guide can use them as an additional way of alerting the operator and those outside the vehicle of any hazards or obstacles.

When sounded, the Bionix's operator has to stop the vehicle immediately.

More experienced, regular trainers have been added on the ground to supervise and train national servicemen.

They will no longer just be in Land Rovers or other "soft skin" vehicles, said Dr Ng. Instead they will be required to be in the combat vehicles with the trainees during training.

The army is reviewing the need for other vehicles and their occupants at risk during exercises. These include safety vehicles, and vehicles for trainers.

The Army has also put in new safety measures in extrication drills where vehicles have to reverse.

First, trainers will no longer travel in Land Rovers but will join exercise troops in the combat vehicles during high risk training.

Second, for all reversing manoeuvres including extrication drills, the driver can only move the vehicle backwards with the explicit clearance by the rear guide.

Also, the Army will ensure that only essential vehicles are allowed into the exercise area to minimise the risk of accidents.

Dr Ng said that CFC Liu was a well-liked and respected soldier who served with pride.

"We mourn the loss of this precious son. And we hope that the measures we have put in place will prevent a similar incident from reoccurring," he said.

Sent from my iPhone
Posted by ChangCL's Site at 3:12 AM