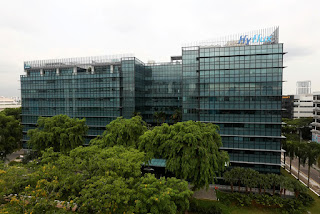 SINGAPORE — The woes of water-treatment company Hyflux, once a market darling and much-vaunted trailblazer in Singapore's entrepreneurial space, have been festering for some time, market watchers and corporate governance experts said on Wednesday (May 23).
However, the company and its board failed to pay enough attention to its finances as it put the pedal to the metal in expanding its footprint, the observers told TODAY.
On Tuesday, Hyflux announced it was seeking court protection to reorganise its business and deal with its liabilities. It also suspended trading of its shares and related securities.
The aim was to allow the company to focus on ongoing talks with strategic investors, optimise operations, nail down areas for growth and complete projects to generate steady cash flow, said the company, which recently posted its first-ever yearly loss since its public listing in 2001.

Associate Professor Lawrence Loh, from the National University of Singapore (NUS) Business School, called the reorganisation "long overdue", as the signs were clear for some time: Hyflux's stock has tumbled to about S$0.20 a share, one-tenth of the price in its heyday. "But it's better late than never," said Assoc Prof Loh.
Synonymous with the company, its founder and group chief executive Olivia Lum, who is also executive chairman, has over the years built a steady record and propelled the firm to global prominence, with operations and projects spanning the Asia-Pacific, Middle East, Africa and the Americas.

Hyflux founder Olivia Lum speaking at the opening ceremony of Singapore's second and largest desalination plant, Tuaspring Desalination Plant. TODAY file photo
Despite her stellar record, observers have raised questions over whether corporate governance and risk management practices had been adequate.
Assoc Prof Loh, who is director of the NUS Business School's Centre for Governance, Institutions and Organisations, pointed out that Hyflux's risk management committee met only once in the 2017 financial year.
By contrast, its audit committee met four times, and its investment, nominating and remuneration committees each gathered twice in the same financial year, checks by TODAY showed.
Assoc Prof Loh said the company needs to beef up its risk management, as it has to make large and risky investments at times.
NUS corporate governance expert Mak Yuen Teen said it was "not enough" for a risk management committee to convene just once a year. "I would ask whether they were actually effective, because what can you do once a year?" he said.
The nature of Hyflux's business, its heavy debt pile and rapid growth meant that risk management was key for the company, added Assoc Prof Mak. "Most committees, I expect them to meet at least three or four times in a year to be meaningful," he said.
Then there is also the issue of whether Hyflux's board of directors had asked the right questions and challenged corporate decisions in the face of a dominant figure like Ms Lum, who has "strong ideas and a strong mind", said Assoc Prof Mak.
He noted that in companies helmed by founders, there was the chance that the founders would either fail to listen to the views of their directors or do not have the "right kind of directors" serving on their boards, because they want to push their ideas through.
Hyflux's eight-member board includes two former employees. Non-executive independent director Christopher Murugasu was Hyflux's senior vice-president for corporate services and Mr Gary Kee, a non-executive non-independent director, was its executive director overseeing areas such as corporate finance and information technology.
Assoc Prof Loh said that in general, it was not good practice to have ex-employees serve on boards, because boards are meant to "represent the shareholder, and monitor the management and employees". "It doesn't square with the fundamental purpose of a board," he said.
Agreeing, Assoc Prof Mak said former employees are also unlikely to question Ms Lum's decisions. "If they are former employees, would they feel that they are in a position to challenge management?" he asked.
TODAY has reached out to Ms Lum and some of the company's independent directors for comment. When contacted, law professor and independent board director Simon Tay declined comment.

Tuaspring Desalination Plant. TODAY file photo
TUASPRING AN ALBATROSS?
Over the years, Hyflux has had to deal with a snowballing mountain of debt.
As of March 31, the company chalked up S$1.3 billion in net borrowings, compared with S$1 billion in equity.
Its landmark Tuaspring project, which combines South-east Asia's largest water desalination plant with a gas turbine power plant, has put a dent in its bottomline.
Hyflux has been in talks to sell a stake in Tuaspring without success.
On Tuesday, Ms Lum said the project had not escaped the brunt of "depressed electricity prices in Singapore", despite improvements in wholesale prices in the last few months which had stemmed losses.
A "sharper rebound" was needed to restore the group to its previous levels of profitability, she said.
Still, the observers said navigating the whims of electricity prices, which are subject to market forces, also boiled down to risk management.
"When you're growing, you can't expect the best-case scenario… you cannot keep thinking (power prices) are only going to go up," said Assoc Prof Mak.
Assoc Prof Loh pointed to the financial viability of the loss-making plant as among the reasons Hyflux has faced difficulties in divesting its single-largest asset. Singapore's small and already-saturated electricity market is also "not very attractive" to potential investors.
Although he did not think it was likely, Associate Professor Nitin Pangarkar from the NUS Business School said national-security considerations could possibly be at play, given that water is an existential issue for Singapore. This could limit the pool of investors for Tuaspring.
CMC Markets sales trader Oriano Lizza said he "wouldn't discount" that consideration too, and that the sale of assets such as Tuaspring could be kept "localised", which could limit foreign investment.
TEMASEK: A 'POTENTIAL WHITE KNIGHT'
The observers said there was a chance an investor such as state investment firm Temasek Holdings — which was formerly a shareholder in the company — could step in, but warned that any such move cannot be perceived as a bailout.
Assoc Prof Loh said there was a strategic element in Hyflux's water business, which puts it in the "realm of national interest". There was a need to indigenise water-treatment capabilities, which are critical for water-scarce Singapore, he explained.
Still, Temasek should not be seen as a "bailer of last resort", and must exercise commercial discipline and due diligence before making a move. "We should not send the wrong signal to the market that if you're in some industry that's critical to Singapore, you can take all the risks, and if you fail, some big sugar daddy called Temasek will come and bail you out. That's the wrong starting point," Assoc Prof Loh added.
Assoc Prof Mak said Temasek must be "hard-nosed" if it decides to step in and must ensure it is not just channelling funds to keep Hyflux afloat. "At the end of the day, Temasek's job is not to do National Service."
A CAUTIONARY TALE
The fall from grace of a firm once touted as a homegrown success should be a cautionary tale for other Singapore-based companies, the observers said.
Assoc Prof Mak acknowledged that while Hyflux has a sound business with the technological know-how to boot, it could have neglected to keep a sufficient eye on its finances as it grew aggressively.
"When you pursue growth, you also need to have proper risk management in place. And I think founders need to also be open to external views," he added. "That's an important lesson when you've independent directors, to make sure that (they) are there to bring different perspectives and to challenge and question decisions."
Assoc Prof Loh said that having a sound business strategy was key. "When you start expanding, you should make sure that your expansion is adequately financed — don't take too much risk, especially in terms of debt financing," he said.
Assoc Prof Pangarkar added: "If you're taking risks in one thing, then you have to balance it with a good stable environment and business prospects in something else. Don't let the risky factors pile up. They can be pretty toxic at some point."

Sent from my iPhone
Posted by ChangCL's Site at 11:17 PM