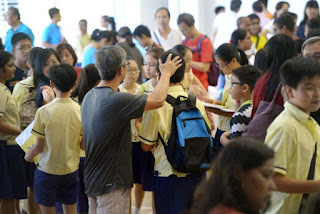 Streaming of students has pitfalls as well as benefits: Ong Ye Kung

SINGAPORE - Sorting students by their ability has led to better educational outcomes, but Education Minister Ong Ye Kung acknowledged that streaming may come at the expense of students in the Normal streams losing confidence.

"The Ministry of Education (MOE) introduced streaming in 1980 to systematically customise learning for students of different profiles," he said on Monday (Feb 18) in a written response to Mr Louis Ng (Nee Soon GRC), who asked in a parliamentary question whether his ministry has studied the effects of streaming on secondary school students' self-esteem and confidence.

But the Government must also recognise the trade-off between customising and stigmatisation, he said, adding that factors affecting self-esteem and confidence are complex and multifaceted.

Mr Ong said that studies by the National Institute of Education have shown that Normal (Academic) students, after spending some years in secondary school, were similarly or more confident in their studies compared with their Express stream peers.

"But there is also feedback from teachers that students in Normal streams may over time also lose confidence and the mindset of growth and development," he added.

To combat this trend and "blur the lines between education streams", he said the MOE has put in place measures such as subject-based banding, where students from the Normal streams can take subjects at a higher academic level; and the Polytechnic Foundation Programme, for students to join the polytechnics without having to take O-level exams.

"Our work in this area is ongoing," he said.

Mr Ng also asked whether there is a pathway for Normal (Technical) students who do well in the N(T)-level examination to take O levels, beyond subject-based banding as an option.

Thereafter, they can progress to Sec 5 Normal (Academic) and take the O levels.

"This allows students to progressively bridge the gap between the academic demands of the N(T), N(A) and O-level curricula," he added.

Over the last five years, about 530 students each year have transferred from N(T) to N(A), he said, adding: "They are identified early, based on their secondary school performance."

Sent from my iPhone
Posted by ChangCL's Site at 2:55 AM