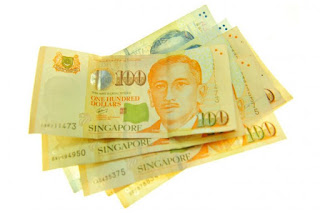 SINGAPORE - Be wary of receiving counterfeit $50 and $100 Singapore currency notes, the police advised the public on Tuesday (June 11).

This comes after they received several reports between March and May of fake portrait series notes being used at convenience stores, restaurants and retail outlets.

The portrait series is the fourth set of currency notes to be launched here and the one currently in circulation.

Notes from the series feature a portrait of Singapore's first president Yusof Ishak.

Three men, aged between 25 and 29, have since been arrested and charged for the alleged offences between May 25 and June 4.

The counterfeit $100 notes in these reported cases bear the serial number 3AX412083.

In their statement, the police said that the counterfeit notes, which are believed to be photocopied reproductions, lack security features such as a watermark and security thread.

The watermark is an image that can be seen when a note is held up to the light, while the security thread is interwoven in the note and runs vertically down.

The police added that some of the fake notes have a simulated kinegram, which is an octagonal reflective foil, that is distinctively different from those on genuine notes.

The image on the kinegram on a genuine note should shift when the note is tilted, while the simulated kinegram on the counterfeit note does not have this characteristic.

The surface of the counterfeit notes also lacks an "embossed feel", unlike on genuine notes.

Those who suspect that they have received fake currency notes should make a report at their nearest neighbourhood police centre or delay the person who gave the suspected fake note and call the police immediately.

Members of the public should take note of the person's details, including gender, race, age, height, built, clothing, any tattoos, the language or dialect spoken, and the vehicle the person is using, if any, as well as its registration number.

They should also place the suspected counterfeit notes in a protective covering, such as an envelope, to prevent further tampering, before handing them to the police.

Anyone convicted of using counterfeit currency notes face a jail term of up to 20 years and a fine.

Those found guilty of possessing counterfeit currency notes my be jailed for up to 15 years.

The police have urged anyone with information on the recent cases to call the police hotline on 1800-255-0000.

The public can also submit information online at http://www.police.gov.sg/iwitness

All information will be kept strictly confidential, police said.

Sent from my iPhone
Posted by ChangCL's Site at 3:19 AM