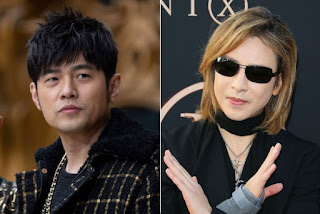 It is not safe now for celebrities to post photographs of themselves having drinks with Jackie Chan.

Their ire came in the wake of protests in Hong Kong against having an extradition treaty which could send dissenters to mainland China for trials.

Chan is seen as pro-Beijing, appearing in a recent video that featured him, among others, singing the Chinese national anthem.

When he was asked about the outcry in Hong Kong, Chan, who was in Taipei to promote his new album I Am Jackie Chan, his first pop album in 16 years, said: "I just found out only yesterday that there was a big parade. I don't know anything about it."

That bland response did not go down well with some netizens, who felt that Chan, 65, should have used his star power to at least ask for calm from the protesters and authorities in tackling the issue.

Chou, 40, who captioned his photo with Chan that was put up on Wednesday (June 12), said: "Wishing Big Brother big sales for his new album."

The album has input from Chou.

According to Taiwan News, that sentiment infuriated netizens, who called Chou out for being insensitive, given that the atmosphere in Hong Kong was still tense then.

Other netizens asked Chou to drop ties with Chan, whose fling with Hong Kong beauty queen Elaine Ng back in 1999 is still not entirely forgiven by Taiwanese, given that he was married to Taiwanese sweetheart Lin Feng-jiao, a former actress.

Yoshiki, 53, also found himself in the firing line when he posted a picture on June 12, captioning it: "Wonderful dinner with #JackieChan."

According to portal SoraNews24, one netizen wrote: "I am sorry, X and you are very important to me and I love you very much, but your photo with this guy made me cry."

But some fans tried to drum up support for the musician, with one posting: "You guys should keep your politics and personal hatred out of Yoshiki's page. Have some respect."

"My dear fans, if any of my posts made you feel like... I'm not considering any situation, I deeply apologise. I really care about all my fans and friends," he tweeted on June 14.

Meanwhile, there is talk that Chan's management would now have a hard time getting other celebrities to help plug his album, raising fears over its sales prospects.

Sent from my iPhone
Posted by ChangCL's Site at 6:48 PM