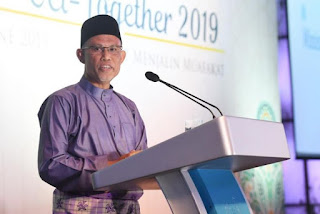 Muslims in Singapore a model for those in other countries: Masagos

SINGAPORE - Muslim communities globally find themselves in challenging times, but Muslims in Singapore are far more happily placed, and can be a model for those in other countries, Mr Masagos Zulkifli said on Friday (June 14).

The system and model that has enabled them to do so should be shared with others, the Minister-in-charge of Muslim Affairs noted, in announcing plans to hold a conference on this theme next year.

It will "discuss the development and application of religious guidance for Muslim minorities who wish to live as dignified and contributing citizens in their societies", Mr Masagos said at an annual Hari Raya get-together for community and religious leaders.

Mr Masagos, who is Minister for the Environment and Water Resources, said that unlike in other countries, Muslims in Singapore are not viewed with suspicion because of the acts of terrorists.

While the community here has not been spared from the influence of extremist ideologies, "what differentiates us is that our community condemns such ideologies", he said.

"Our vigilance against extremism and our cooperation with the authorities to curb problems earn us the trust of others. This also demonstrates our desire to live harmoniously in a plural society," he said.

Emphasising this difference, he added: "We need not be apologetic for terrorism, nor do we need to see ourselves as victims. We are not liabilities, rather, we contribute to the nation and the economy, and we solve our own problems. We have the trust and respect of society."

Speaking in English and Malay, Mr Masagos outlined how the Muslim community has achieved various successes, and excelled in three key areas: character, competence and citizenry.

On character, he cited how 400 religious teachers, or asatizah, and professionals have stepped up to help in various M3 initiatives since the programme was launched last year. M3 is a collaboration between three community institutions - the Islamic Religious Council of Singapore (Muis), self-help group Mendaki and the People's Association Malay Activity Executive Committees Council (Mesra) - to better help the less well-off uplift themselves.

Another example is how the community has come forward to help the needy.

Last year, Muslims gave $43 million in zakat to help vulnerable families, and another $18 million to build mosques. Total contributions to mosque building, since 1975, exceed $250 million - excluding donations made directly to mosques on a daily basis.

He also pointed out that the community's wakaf (charitable endowment) assets stood at more than $940 million as of last year.

"We were able to raise these funds not because there are many high-income earners or millionaires among us, but because of our values," he said, noting the high volunteerism rate among Malay/Muslims.

Mr Masagos also underscored the importance of being competent, and cited three examples of individuals who have uplifted themselves.

One of them is tech professional Arif Rahman, who had to leave school after his N levels, and worked odd jobs like as a private-hire driver. But he had a keen interest in the IT sector, so he signed up for a placement programme, and today works in an international blockchain start-up.

Mr Masagos highlighted two goals for the community: ensure that all Malay/Muslim students can at the very least enrol and graduate from the Institute of Technical Education, and get as many students as possible into university.

As for citizenry, he noted that many Muslims elsewhere cling to religious rituals and don't see how they can be both good Muslims and good citizens.

"We may pride ourselves on the religious and social values we hold as a Muslim community, but such values can only be appreciated when they are brought to life through initiatives that benefit everyone," he said.

He urged Singapore's 4,500 asatizah to work with the Office of the Mufti and other community leaders to develop a school of thought for the Singapore Muslim community, so that Muslims here can go about their religious practice with confidence.

"We do not have to worry if it is a religious problem to attend milestone celebrations or life events of friends or even family members of a different faith. In fact, we should wish them well during their festivals," he said.

Rounding off his speech, Mr Masagos said the Muslim community is not one of problems, but one that solves them.

"Life will always bring challenges. For Singapore, we cannot forge ahead if we have no confidence in ourselves. If we start feeling less than others, we will certainly fail," he added. "We must remember that we are a community with the strength of character, with the competence to contribute and with a strong sense of citizenry. We are a community of success."

Sent from my iPhone
Posted by ChangCL's Site at 7:54 PM