84 killed, many injured after van ploughs into crowd in Nice, France during Bastille Day celebrations

NICE, France (AFP, REUTERS) – Terrified revellers screamed as a truck ploughed at speed into a crowd of fireworks spectators in Nice, turning Bastille Day celebrations into a night of horror on Thursday (July 14).

Eighty-four people had been killed and 18 were in "critical condition", interior ministry spokesman Pierre-Henry Brandet said on Friday (July 15).

Other media reports said up to 100 people have been injured. Two Chinese were among those injured, according to the Xinhua news agency.

AFP correspondent Robert Holloway, who was among the the crowd celebrating France's national day on Nice's Promenade des Anglais, had to shield his face from flying debris as the truck plunged 2km along the beachfront, mowing people down.

"We saw people hit and bits of debris flying around. I had to protect my face from flying debris."

BREAKING: Reports of multiple casualties in #Nice #France after a truck is driven into a crowd. - @News_Executive

The truck that drove into the crowd in #Nice (#France), heavily damaged in front 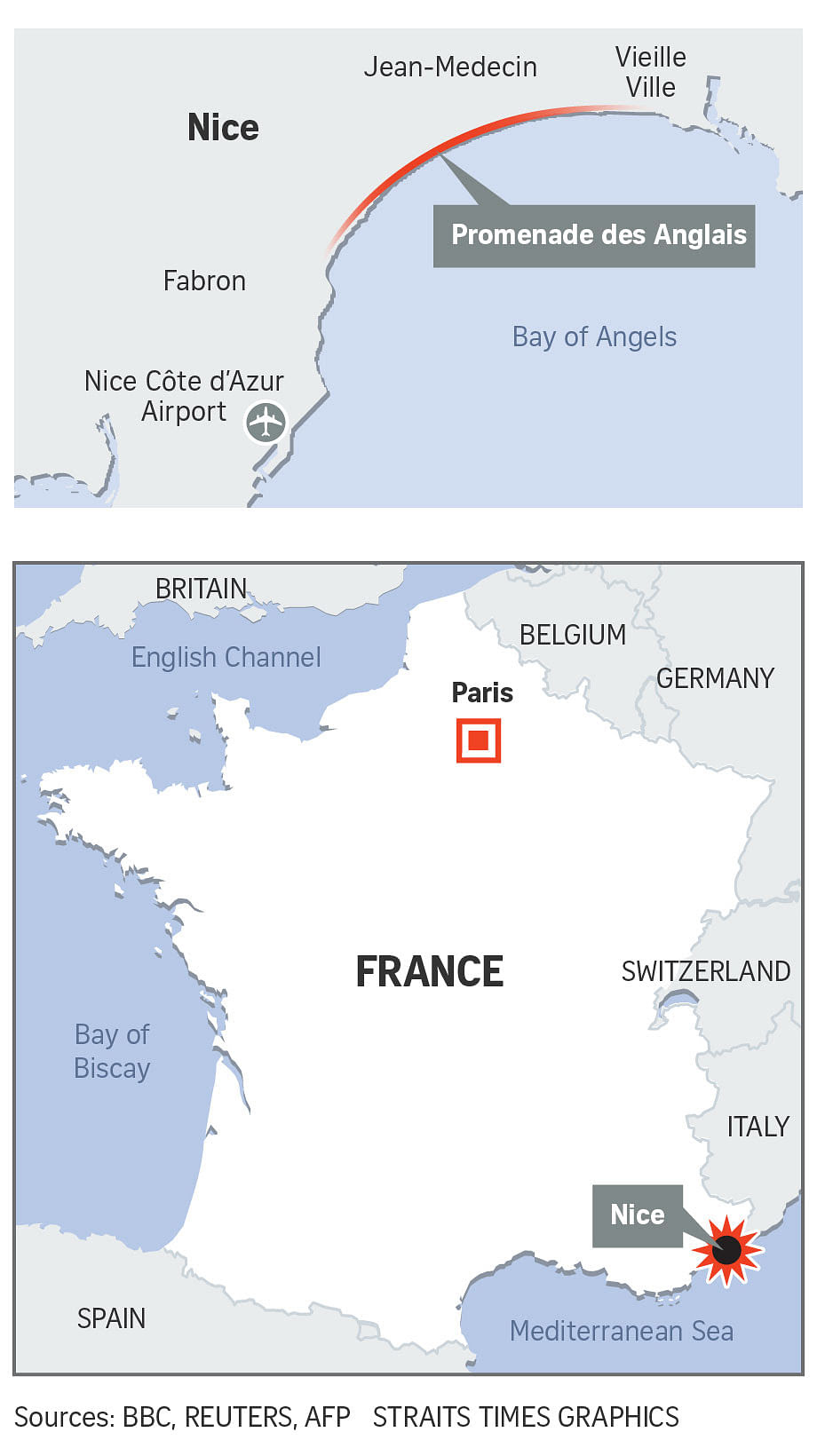 People screamed and scattered as the truck veered down the palm-lined promenade where thousands of adults and children had gathered for the fireworks, walking towards the famous Negresco Hotel.

"For a big truck like that to get actually onto the promenade and then to go in a fairly straight line along there, looked to me like a very deliberate act," Mr Holloway said.  "It was about 100m from me and I had a few seconds to get out of the way."

Other witnesses described hearing gunfire, although this was not immediately confirmed by the authorities.

Police could be seen surrounding the truck in the early hours of Friday, its windscreen riddled with bullet holes, under the lights of the Negresco Hotel.

Witness Roy Calley, who said he lived 200m from the promenade, told the BBC there was "all hell breaking loose" and the situation was "pretty horrendous".

"It was a celebratory atmosphere, it was fun, people were enjoying themselves.  Suddenly I heard a huge, what I can only describe as maybe an explosion or a crash.  A lot of people were screaming. That was followed by what I thought were maybe gunshots."

Australian Emily Watkins said she was less than 50m away from the incident and saw the truck on the promenade but did not realise what was happening.

"There was a lot of confusion. I don't actually remember seeing the truck moving," she told the Australian Broadcasting Corporation.  "There was a lot of screams coming from ahead of us where the truck was, and people just running towards us and without really knowing what was going on we turned and ran as well."

"As we were running away we could hear what I thought at the time were more flares or fireworks," she said. "People were tripping over and trying to get into hotel lobbies and restaurants or car parks or anywhere they could to get away from the street."

Fear spread across the city as hundreds of people hid and locked themselves in cafes and bars to protect themselves from possible attack, the Daily Mail Online reported. 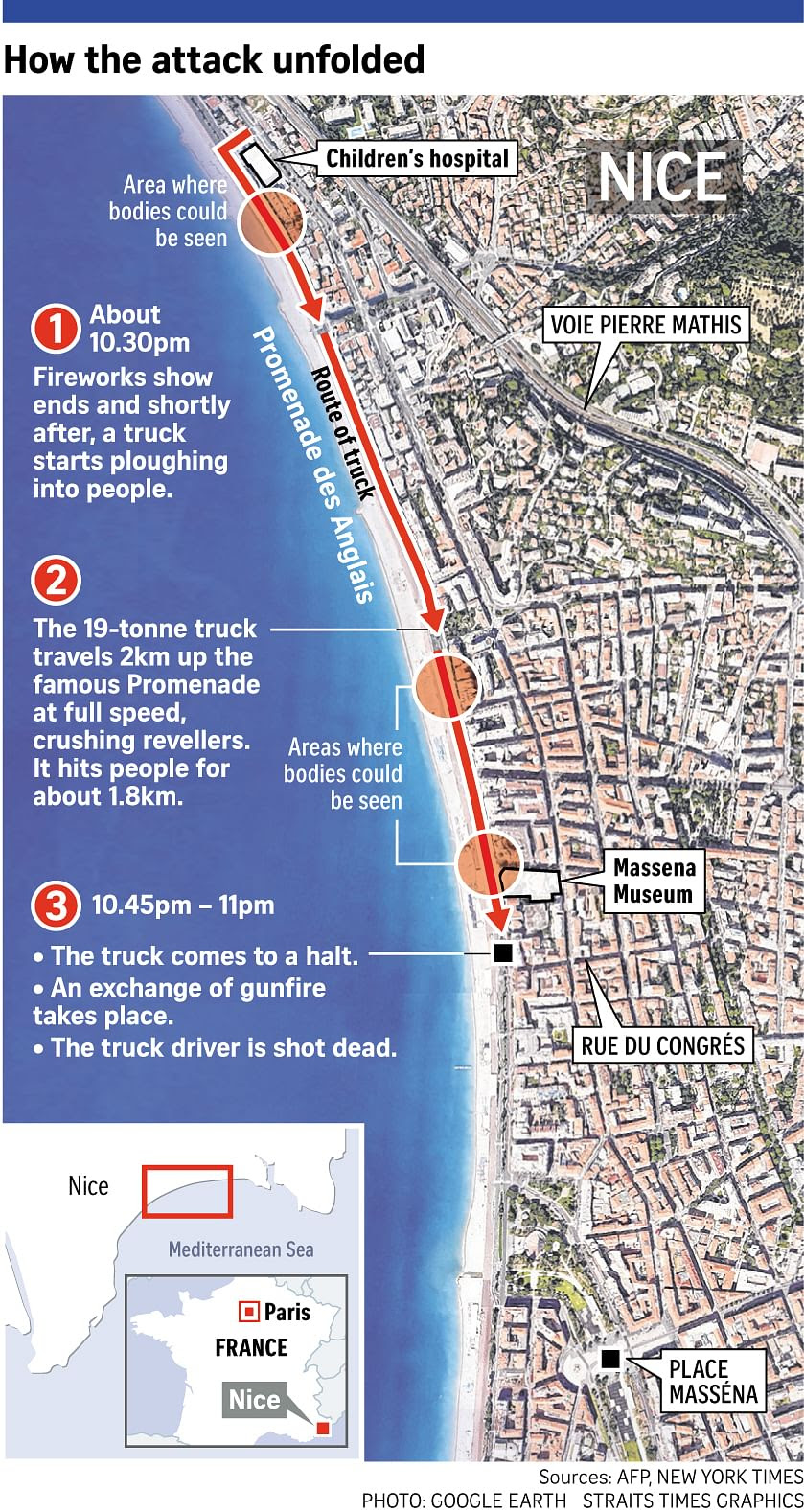 Reports said the driver of the truck, which officials said was loaded with "heavy weapons", had been killed and an accomplice was on the run.

Prosecutors said the probe would be handled by anti-terrorist investigators.

"Investigations are currently under way to establish if the individual acted alone or if he had accomplices who might have fled," the interior ministry spokesman said, but he denied reports that a hostage-taking incident had taken place.

President Francois Hollande's office said he would preside over a meeting of the country's defence and security chiefs on Friday.

The bloodshed comes eight months after Islamic State fighters attacked Paris nightspots and left 130 people dead, dealing a hard blow to tourism in one of the world's top destinations.

The Islamic State in Iraq and Syria (ISIS) has repeatedly singled out France as a prime target, and the country has been under a state of emergency ever since the Nov 13 Paris attacks.

The Mediterranean city of Nice, with its pebble beaches and clear blue water, has been a magnet for sun-seekers and the jetset since the 19th century.

The assault came just hours after France announced that a state of emergency declared after last November's attacks would come to an end later this month.

Mr Hollande said the decree would not be renewed beyond July 26, because a law permanently bolstering security in France was adopted in May.

"On behalf of the American people, I condemn in the strongest terms what appears to be a horrific terrorist attack in Nice, France, which killed and wounded dozens of innocent civilians," Mr Obama said in a statement.

The incident prompted Mr Donald Trump, who is running for president, to abruptly postpone his planned announcement on Friday of his vice presidential running mate.

Downing Street said on Friday British Prime Minister Theresa May is being briefed on the "terrible incident" in Nice and the UK authorities stand ready to assist their French counterparts.

Subscribe now and choose from eight amazing gifts! Plus, stand to win a trip to anywhere in the world or a luxurious stay at Resorts World Sentosa! Find out more at bit.ly/STsuboffer

Sent from my iPad(Air)
Posted by ChangCL's Site at 8:58 PM