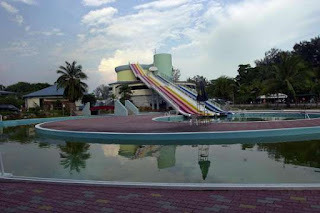 The splashes at Big Splash have been missing for a decade now. Come October, the 40-year-old East Coast Park landmark and its name will also go the way of the multi-coloured water slides into history.

When its lease expires, the site will be returned to the Government for redevelopment, thus bringing the curtain down on one of Singapore's first water theme parks.

Housewife Toh Sew Lay, 52, who once visited the water theme park with her secondary school classmates, says: "Going there was a real treat because it was the biggest water park at the time. I had so much fun playing in the pool.

"I could not swim, so I found the slides a little daunting at first. Nonetheless, I still went on them in the end and had a splashing good time."

The attraction was developed in 1977 at a cost of $6 million by Goldhill Properties, a private developer, and opened in the same year as a water theme park with four pools, including a 50m-long pool capable of creating 1m-high waves, a 230m-long flowpool, where water was kept in constant flow, and a children's pool. All the pools were filled with seawater.

Going there was a real treat because it was the biggest water park at the time. I could not swim, so I found the slides a little daunting at first. Nonetheless, I still went on them in the end and had a splashing good time.

The water slides had five lanes. The tallest slides were more than six storeys high and were reportedly the highest water slides in the world at the time.

During Big Splash's heyday in the 1980s, it had big-name tenants such as KFC and many corporate events were held there.

He says: "For me to meet so many famous people and be able to talk to them, I felt very honoured."

But in the 1990s, the 300,000 sq ft Big Splash complex fell into disrepair. The slides grew filmy with algae and word of the dubious sanitation of the pools spread and became an urban myth.

Then in 2006, Seafood International tendered for the site from National Parks Board and did away with the water slides. It has since become a lifestyle and dining enclave.

Its last day of operation is Oct 21, although some businesses will cease operations earlier.

Some tenants, including Seafood International, will have to stop operations temporarily while they look for new locations.

But until its closure on Sept 16, the 500-seat restaurant - which has been operating at the location since 1983 - will run a Thai-themed a la carte lunch buffet promotion, featuring many dishes on its original menu, such as Thai prawn cakes, fishcakes and basil prawn and chicken.

Says its director Justin Tan, 43: "We want to bring back the favourites for old times' sake, so those who supported us can come back for one last visit."

The year was 1988 and Mr Wong Tham Poh was a lifeguard at Big Splash water theme park.

On weekends, when thousands thronged the park, he strode the premises in a white T-shirt, red shorts and sunglasses.

He thought himself the king of safety - with a sculpted physique - who also knew how to have fun.

Whenever he was on a break, he would join in the water games that patrons were playing. How many invitations did he get a day? He did not keep count.

Mr Wong, now 53, says: "Back then, work felt like a party every day. The lifeguards - there were about 30 of us - felt like one big family.

"We were young, we got along. We loved the customers - the more, the merrier, really. Even if we were not on duty, many of us lifeguards showed up. Honestly, in those days, what else could you do with your free time?"

His nickname at the pool was "Spider" because of the way he swam freestyle.

"People said my body looked like a spider swimming - my limbs were all over the place. But at least I could swim fast," says Mr Wong, who worked part time and full time as a lifeguard at Big Splash for 18 years.

Although he met many pretty lasses in the course of his work, he never dated any of them. His wife was a salesgirlhe met outside of his job and, ironically, she could not swim.

Mr Wong, who has two sons aged 18 and 13, says: "You could say I was pretty wild when I was young. But even when I was having fun, I kept one eye on the pool."

He recalls going to the aid of children who unwittingly ended up at the deep end of the pool, but does not remember the details.

During the theme park's heyday, there were occasional reports of customers injuring themselves while going down the slides.

He says: "If you followed the instructions - sit upright and hold the sides of the slide - you would have no problem. It was only when customers tried to do stunts - like stand up or jump from lane to lane while going down - that trouble arrived."

Nowadays, he works full time as a lorry driver for a shipping company. In the evenings, he works as a kitchen hand at The Seafood International Market & Restaurant, killing crabs, lobsters and fish ordered by customers.

He says: "It is strange that my life came to revolve around Big Splash. But it is honestly not a bad place to be."

Another former lifeguard at Big Splash, Mr Gary Lim, 40, also works at the lifestyle and dining enclave now, as a property maintenance executive.

Referring to his lifeguard days, Mr Wong says: "My life now is more mellow. As they say, all good things come to an end. Still, I am grateful I was that person once - young, fun, without a care in the world."

Growing up and marrying there

In 1985, Mr Kee Ah Lam married Madam Ang Ah Keok at The Seafood International Market & Restaurant, where he works as a purchasing manager.

Accountant Yong Ming, 30, says: "Big Splash has been a big part of my life. My father was already working there when I was born. As a child, I visited the water theme park and had many fond memories there.

"You can also see the sea from the restaurant. When it was time to choose a location for my wedding, it was my first choice."

In 1983, his father started work at the restaurant as a storeman. Two years later, he married Madam Ang, who handles quality control in a factory.

Looking at his wedding photos, Mr Kee says: "See the flared trousers I was wearing? In those days, such trousers were very fashionable.

"I chose the restaurant because I worked there. Why would I want the best day of my life to be anywhere else?"

He adds: "Having your wedding dinner at a restaurant was also cheaper than at a hotel."

A year after the wedding, he left to work in the construction industry. But three years later, he returned to work in the restaurant and has not left since.

He says: "I realised that working in a restaurant was my true calling."

Yong Ming recalls that although his father worked at Big Splash, his family visited the attraction only a few times a year, due to his father's busy schedule and the fact that it was not easily accessible by public transport.

But when they played there, Yong Ming says, "we really enjoyed going down the slides, playing in the pool and eating at the KFC outlet".

"Those are among my best memories," he adds.

Nowadays, he visits Big Splash every one or two months - usually with his wife - to eat at the restaurant.

"I have grown up with Big Splash and seen it evolve over the years. It will be sad to see it go."