The changes take effect in 2021, which means they will involve those who started Primary 1 this year.

The ALs are then added to form the PSLE score, which will be used for Secondary 1 posting.

Four AL1s in all four PSLE subjects - English, Mother Tongue, mathematics and science - will translate to a score of 4. The lowest score a pupil can get is 32.

The changes also mean that a pupil's score will also no longer depend on how they do relative to each other, as it is now.

MOE said the changes are part of a larger shift to nurture well-rounded individuals and move away from an over-emphasis on academic results. They will reduce fine differentiation of students - a key complaint of the current scoring system; reflect a student's level of achievement regardless of how his peers have done; and encourage families to choose schools based on their suitability for the child's learning needs, talents and interests.

Short for "transformed score", the aggregate T-score is the sum of the T-scores in all four subjects. It is an adjusted score that shows how well a pupil does relative to his peers. The T-score has been in place for decades.

Many have complained that the way it differentiates pupils is not meaningful. For instance, a pupil with a T-score 231 may qualify for one secondary school but not one who scores 230. But with the new scoring system, students will no longer be as finely differentiated, as there will only be 29 possible PSLE scores, compared to more than 200 T-score aggregates under the current system, said MOE. 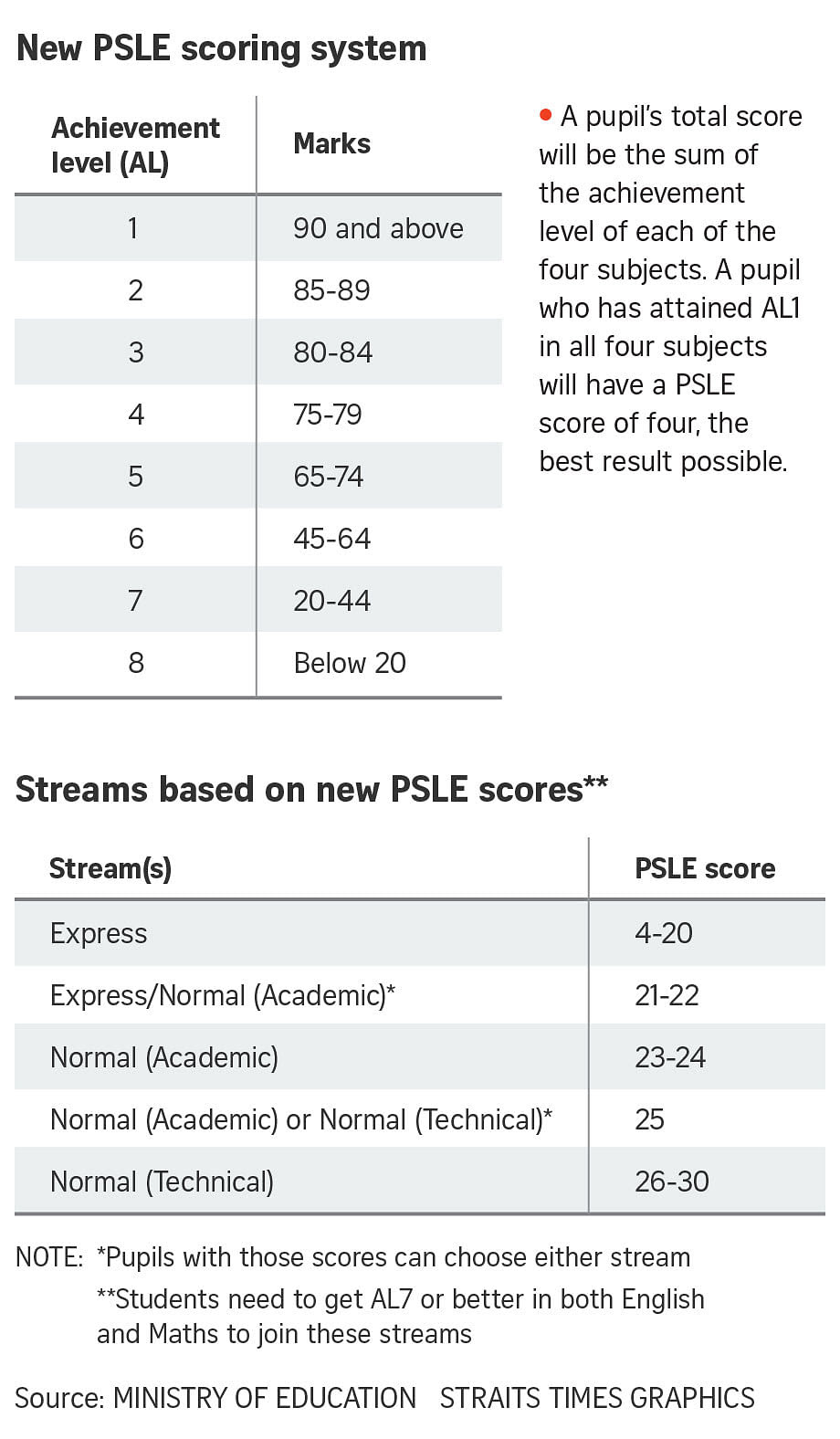 Secondary school posting will continue to be based on academic merit first, the ministry added. But as more students will have the same PSLE Score and schools will be less differentiated by cut-off points, the following tie-breakers will be used for students with the same PSLE score:

Choice order is a new tie-breaker. "This recognises that families have a range of considerations when choosing secondary schools. It will also encourage families to consider factors beyond cut-off points, and make their choices based on a school's unique culture, ethos and programmes. This will help students to find a school which is a good fit for their interests and strengths," MOE said.

For admission to Special Assistance Plan (SAP) schools, students will continue to be recognised for their achievements in Higher Chinese Language through a posting advantage.

The secondary school streams will remain - pupils with a PSLE score of four to 20 will qualify for the Express stream. Those with PSLE scores of 21 to 22 can choose to enrol in either Express or Normal (Academic). Those with scores of 23 to 24 will be placed in N(A), while a score of 25 gives pupils a choice of N(A) or Normal (Technical). Pupils who get 26 to 30 - with at least an AL7 for English and mathematics - qualify for N(T).

Those who get AL8 for English and mathematics - and have scores of 31 or 32 - would need to retake the PSLE, or join the NorthLight School and Assumption Pathway School, specialised secondary schools for those who do not pass the PSLE.

Explaining why these changes will be implemented only in 2021 and not earlier, MOE said: "The PSLE changes are significant, so we will not rush the implementation."

The next few years, the ministry added, will be used to test the new exam scoring and posting systems; give parents and schools time to familiarise themselves with the new scoring system, and develop distinctive programmes in secondary schools, so that students can choose those that complement their diverse learning needs, interests and strengths.

Acting Minister for Education (Schools) Ng Chee Meng who spoke to the media after the announcement said the new grading system based on the eight ALs aims to strike a balance between "too fine a differentiation" and "insufficient differentiation".

He said there was a need for some differentiation based on students' results so that they can be matched to the secondary school that best suit their needs, and also minimise the level of balloting.

He said MOE had done a simulation and estimates that only 1 in 10 will be subject to balloting.

In response to parents who wished that MOE had been bolder in its changes Mr Ng said the changes were not meant to be revolutionary, but rather evolutionary.

"Some things are best evolved and not revolutionalised," he said noting that Singapore's education system is a strong and robust one as educators have done very well over the last 50 years in building a strong system.

Do you have questions on the latest PSLE changes? AskSandra at askST@sph.com.sg

Subscribe now and choose from eight amazing gifts! Plus, stand to win a trip to anywhere in the world or a luxurious stay at Resorts World Sentosa! Find out more at bit.ly/STsuboffer

Sent from my iPad(Air)
Posted by ChangCL's Site at 5:39 AM