Suspect on the run after $30k bank robbery in Holland Village

Police are hunting a Caucasian man who is believed to have robbed a Standard Chartered Bank branch in Holland Village of about $30,000 yesterday.

The heist took place at about 11.25am when restaurants were busy with the lunchtime crowd.

The Straits Times understands that the suspect strode into the bank and handed the teller a slip of paper with his demands.

After she complied, he made off with the cash on foot. No weapon was seen during the incident, which was over in minutes.

It is understood that there was no security guard present at the bank.

In a statement later, a Standard Chartered Bank spokesman said that no employee or customer was injured in the incident.

The spokesman added that the bank has filed a police report and is assisting with investigations. No further details were given.

"We would like to highlight that the safety of our customers and staff are our top priority and our branch staff are all well trained to react in such situations," said the spokesman.

The suspect was still on the run at press time last night.

One resident, who lives in the Chip Bee Gardens estate across the street, told The Straits Times that police visited his home with a picture of the suspect.

He was described as an Australian, dressed in a grey hoodie and mustard trousers.

The robbery put the area around the bank on lockdown, with Standard Chartered closing the branch for the day.

Witnesses said police arrived before noon and cordoned off the area.

Bank customers were seen being turned away during the investigations. Just after 12pm, more than 10 police vehicles were seen parked along Holland Avenue.

Officers in bulletproof vests and with riot shields were also present.

Throughout the day, forensic investigators from the Criminal Investigation Department were seen entering and leaving the bank branch.

The police cordon was later expanded to include the nearby Citibank and HSBC branches.

Ms Denise Richter, 22, an employee at nearby cafe Park, said that no alarm was heard during the time of the incident.

The cafe's employees were asked by officers if they had cellphone or closed-circuit television footage. 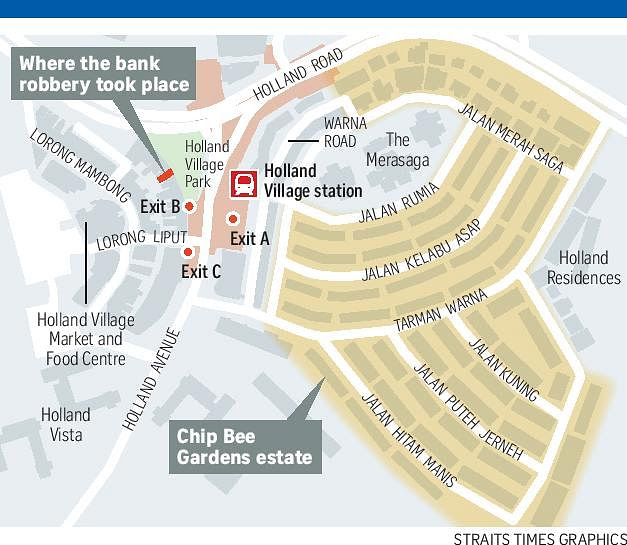 SEE TOP OF THE NEWS

Police cordon set up, nearby areas combed for clues

Sent from my iPad(Air)
Posted by ChangCL's Site at 3:08 AM