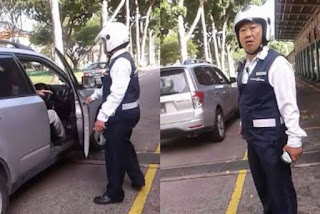 SINGAPORE - The Land Transport Authority (LTA) will investigate an altercation between one of its enforcement officers and a motorist at a taxi stand near Yio Chu Kang MRT station on June 23.

In a video posted on social media, the male officer was seen arguing with the car driver before he yanked open the car door.

A woman who filmed the heated argument then stepped in to remind the officer that he was "working for the Government" and should not behave in such a manner.

In a statement posted on its Facebook page on Sunday (July 3) evening, the LTA apologised for the incident and said it "does not condone such unprofessional behaviour in our enforcement officers".

"We have also reminded our enforcement officers and traffic wardens that they need to discharge their duties with care and professionalism," the statement added.

The LTA's statement came after the video was posted on Facebook last Saturday (July 2) afternoon by user Tong Bock Toh. The short clip has since been viewed about 21,000 times, garnering close to 500 shares.

It showed the officer and the car driver exchanging words in dialect before the woman intervened to diffuse the situation.

The officer can be heard telling the woman in English: "He wants to hammer me, ask him come out."

Sent from my iPhone
Posted by ChangCL's Site at 4:43 AM