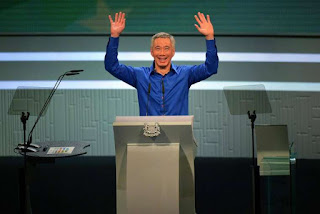 Prime Minister Lee Hsien Loong drew a standing ovation from a relieved audience when he resumed his National Day Rally speech last night, after he was suddenly taken ill while addressing the nation on live television.

At about 9.20pm, 2½ hours into the rally, he paused, faltered and appeared unable to continue. Three ministers and several security officers rushed up on stage as the audience in the auditorium at ITE College Central - as well as those watching on TV - looked on anxiously.

He was helped off the stage but waved as he left.

Some in the audience went outside to the reception area, while others stayed in their seats. The mood was sombre. About 10 minutes later, the Prime Minister's Office (PMO) said that a medical team attending to him had assessed that his condition was not serious. The mood became perceptibly lighter.

Twenty minutes after that, Deputy Prime Minister Teo Chee Hean announced that Mr Lee would resume his speech. The PMO also said that Mr Lee had felt "unsteady because of prolonged standing, heat and dehydration". It added: "His heart is fine and he did not have a stroke."

At 10.40pm, he returned to speak for another 15 minutes. He looked well and thanked the audience for waiting for him.

Smiling, he said: "I've never had so many doctors look at me all at once. They think I'm all right but anyway I'm going to have a full check-up after this. But before that I'd like to finish my speech."

After the rally, he went to the Singapore General Hospital for a check-up.

The rally is where Mr Lee traditionally spends the better part of three hours mapping out the Government's plans for Singapore, speaking first in Malay, then Mandarin and English.

Yesterday, in marked contrast to last year's celebratory rally during Singapore's 50th year of independence, he sketched out threats and challenges facing a Singapore at 51.

But he painted an upbeat portrait of the future, saying that although the nation will be tested from time to time, he was confident it would succeed as long as Singaporeans held fast to their foundational tenet of staying one united people, regardless of race, language or religion.

"We are a people building on the work of each generation, looking to the future with confidence," he said.

He said disruptions to businesses and workers from technology and globalisation would be a defining challenge. He noted that small and medium-sized enterprises have found it tough to adapt to the relentless changes, and urged them to stick out the rough patch, promising that there would be opportunity in crisis.

As a small state in a region grappling with the threat of terrorism, Singapore also had to contend with geopolitical and security realities, he added, calling on citizens to understand the national interest and support Singapore's position in its relations with other countries.

He noted that a dozen radicalised Singaporeans had been picked up in the past two years, and this multiracial society will come under strain should an attack happen. Whether it survives an attack will boil down to "our collective resolve to stand with each other".

Singapore is in a good place as religious and community leaders have taken a courageous stand by refuting extremist views, and made clear that terrorists do not represent Islam, said Mr Lee.

Religious leaders, in particular Muslim leaders, have made sure their faiths are practised in a way fit for Singapore's multiracial context.

Ultimately, prosperity and security depend on good politics, Mr Lee said. "Our politics must unite the country and uphold our multiracial society."

To this end, changes will be made to the elected presidency to ensure that minorities are elected to the highest office from time to time. The Government has also accepted in principle the recommendations by a Constitutional Commission on a review of the elected presidency. It will release the commission's report soon, issue a White Paper on the changes later, and debate the matter in Parliament.

Still on the topic of good politics, Mr Lee expressed relief that he had managed to reinforce his team in last year's general election and would continue to do so at the next polls. The issue of succession was all the more important, he said, in the light of what happened to him earlier in the night.

Sent from my iPhone
Posted by ChangCL's Site at 8:01 PM